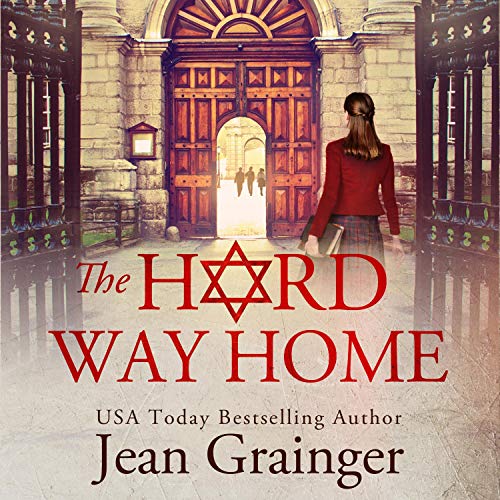 Liesl Bannon has never felt like she was truly at home anywhere, not since her mother placed her and her brother Erich on the last Kindertransport out of Berlin in 1939. She’d been so much more fortunate than most Jews, saved from the horrors of the Nazi regime. Being adopted by Elizabeth and Daniel Lieber meant she and Erich spent the war in Northern Ireland, safe and loved, but Liesl always knew something was missing.

When an opportunity to return to Berlin to represent her university presents itself, she is so torn. Should she go back to the city that rejected her and her family, would it be too harrowing, or would it feel like home?

In Berlin, a chance encounter with an old family friend sparks emotions for Liesl that she’d suppressed since she was a child. She finds herself desperately wanting to go back to those carefree days before Hitler, when life made sense, but why was her family so set against her return? Was it because they were worried about her as they claimed, or was there a darker, more sinister reason?

The Hard Way Home is the third book in the best-selling Star and the Shamrock series.

the best series I have ever listened to.

I listened to all 3 books in 3 days. compelling and tearful. i cried. Thank you for your research and opening my eyes.

This was my least favorite of the theee books. The story line was just okay not as interesting as the first two were.
The narrator was great.
All our favorite characters were back. If you stop at book two you won’t miss anything. Good not great.

Another winner from Mrs grainger

I’ve just finished the trilogy and loved every bit of it. No profanity,hardly any gratuitous sex but a great story that kept my interest. The word pictures she painted wants me to look up pictures of Ireland on internet. The narrator was excellent with German and Irish accents right on time. The southern fly boy from Biloxi had accent that people in the Deep South like me don’t sound like. By the way I live less than 50 miles from Biloxi,Mississippi. But the southern boy was in her other prequel books. Still nothing can take away from the talents of Mrs. Grainger. What a story she shared with us.

i loved this book, and also the narrator's voice. she reminded me so much of 2 Irish woman i know. the story is so touching.

Another moving installment of the Star & Shamrock series. Wonderfully well-written, lovely characters, and a page-turning story. Finished in one day, couldn’t put it down!!

The narrator is excellent and makes this a delightful listen. I’ve learned the hard way that a narrator can make or break an audio book. Siobhan Waring is fabulous—very well done!

Unbelievable how quickly I am reading this series…I cannot put them down! Such a beautifully written novel account of the terrible time in the world’s history…..and the children that were saved!

Book 3 was amazing, so detailed and much different than the 2 books prior. Looking forward to the 4th, but also sad that this will be the end.

I am convinced now that if I were reading these books I would have given up after book 2. It is all just a little too formulaic for my taste. The people are unbelievably "good" and karma is a b1##h for Nazis. It reads like those awful romances I hate, you know the ones. But Siobhan Waring makes the books much better than they really are.

You wont put this one down

Jean Grainger books are so good. I only listen to them on my commute to and from work. Sometimes, I stay in the car a few extra minutes just to keep listening. I am a full time single mom and listening to these books are the perfect ME time. I am not Irish but these books can be loved by anyone of any origin.

An awesome "next chapter" for these characters

Jean Grainger is becoming one of my favorite authors! This is book 3 in this series and learning Liesl's story, worrying with her and for her, and getting to see how it all turns out for her is magical. Sure, it was a bit more predictable than the first 2 books, but it was done with great suspense and intrigue.

I'm looking forward to the 4th and final book in the series!

What a lovely piece

This novel was a little gem of a piece - not my usual taste, but lovely sideways journey.

An excellent next instalment in a great series of books. Great concept with excellent characterisation. Beautifully narrated. Highly recommended.

The most wonderful and moving trilogy

Loved the story and the narrator increased my enjoyment. Thank you. will continue to read more written by Jean Grainger.

A beautiful and moving story

Like all Jean's book, this one touched my heart deeply. A masterpiece. A heartfelt read.

Thoroughly enjoyed this last of the trilogy book. The books covered just about every emotion of the war and post war year from the perspective of two Jewish children during the worst humanity could produce. This book is when one of them grows up and still faces the horrors of effects of war. Beautifully written and shaped characters who are realistically created and the situations that existed at that time. Sad that the story is now over. Will remember it for a long time. Thank you for this trilogy.