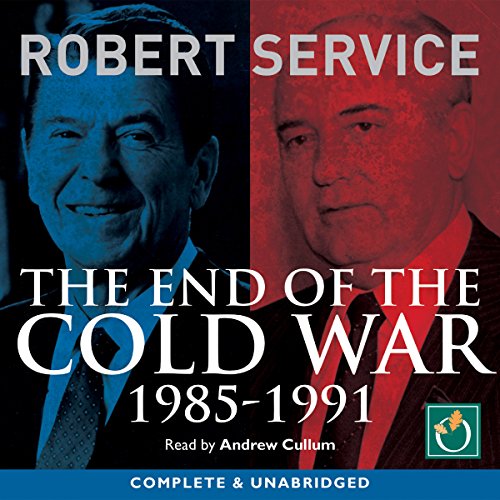 "The great nonfiction book of the year as a serious and fascinating dive into the events that shaped our world it cannot be bettered." ( The Times)
"A riveting read." ( The Telegraph)
"Our leading historian of the Soviet Union...magisterial." ( Observer)

The dismantling of the Berlin Wall in 1989 and the spread of Perestroika throughout the former Soviet bloc was a sea change in world history.

Here, acclaimed Russian historian Robert Service examines precisely how that change came about. Drawing on a vast and largely untapped range of sources, he builds a picture of the two men who spearheaded the breakthrough: Ronald Reagan, president of the United States; and Mikhail Gorbachev, last general secretary of the Soviet Union.

Authoritative, compelling and meticulously researched, this is political history at its best.

The End of the Cold Warに寄せられたリスナーの声

Far too much on preparations for summits, with major events like the fall of the Berlin Wall covered only briefly.

This is a very sound political history of Mikhail Gorbachev's efforts to end the military Cold War between the USSR and the USA. It is regrettably low, however, on description or analysis of the societal and cultural causes, evolutions, and results of the cessation of military threat. Service's devotion to the "great man" view of history here reaches fever pitch; much of the book, therefore, is descriptions of how the principal government figures of the USSR and the USA behaved with each other, and how their personalities and (inferred) beliefs about the other side and the proper purpose of their discussions affected proceedings. His detail of events, mindsets, negotiating points, political movements, etc. is good, but how or why they develop is lacking. Similarly, women (four of whom appear in the text: Raisa Maximovna Gorbachev, Nancy Reagan, Margaret Thatcher, and a nameless Russian official) are incompletely described, each being understood as a stereotype through a hetrosexual male gaze. The book gets 3/5 essentially because the history is incomplete; it is Service's list of military-political events in the USSR and the USA between 1985 and 1991, hung loosely off a narrative of the naivete (as he see it) of Mikhail Gorbachev, and the sensible (as he sees it) cooperation of Ronald Reagan and George Bush Snr.

The performance is very good, with few mistakes or inconsistencies. Cullum's comfortability with non-English names and Russian-language quotations is to be highly praised.

Some very strange pronunciations in this narration. And not of the Russian words... Occasionally found it distracting.

Having read several books, articles journals and analyses, this ranks as the most comprehensive. Robert Service provides a detailed, investigative and blow by blow account of the negotiations, events and personalities who brought about what was simply unthinkable to the political elite and general populations.
Service (as far as this listener perceives) reveals no biases in assigning credit for the eventual outcome.
Andrew Cullum's narration is steady and clear, and accurate in pronunciation of Russian names, although not in pronunciation of Chinese names.
In all a book that is both informative and gripping and should be considered by all ebthusiasts of International Relations or this period of history, regardless of familiarity with the subject matter.

Would you consider the audio edition of The End of the Cold War to be better than the print version?

I haven't read the print version, but as the audiobook is 24 hours long, I think this was the better option!

A period of history where the world had stellar politicians and forward thinking staff. Reagan, Gorbachev and Thatcher all play a massive role in the end of Soviet Russia. Something unimaginable a decade before.President Reagan especially comes across as a charming very likeable man.

The summit meetings are always interesting and a highlight. Thatcher taking her shoes off, Reagan's visit to Moscow.

This is a very detailed, very well written book. It has a lot of detail from the Russian point of view and I really enjoyed this. It's a very long book but it feels natural and you find yourself gripped. Anyone who is interested in this part of history should download and listen. Very very good indeed.