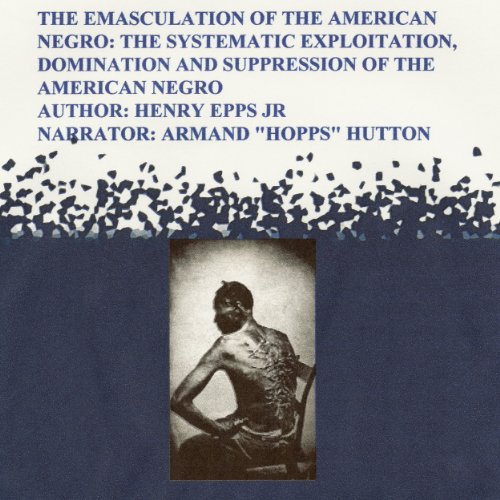 Yet, with all of these culturally accepted names, the American Negro is still a Negro! Today, a few Negroes have received some fame and fortune but as soon as they step out of their position, the status quo puts them back in their place with public lynching in the media. The status quo has used intimidation, domination and exploitation to continue the systematic process of emasculation and genocide of the American Negro male.

How can an American Negro be called African-American when 99% have never been to Africa? The American Negro is a culturally constructed image of the darker pigmented skin people of America.

The Emasculation of the American Negroに寄せられたリスナーの声

Worth Listening to on a Rainy Day

The Emasculation of the American Negro starts off with a bang. The author captivated my interest by assessing how the legacy of slavery and Jim Crow has adversely affected the African American community, and I thought I was in for a ride through the current racial tension in America regarding the recent murders of black males by law enforcement officers. However, the book turned out to be an academic potpourri of stories that have been told hundreds of times. How many times can you retell the story of Emmett Till? or Plessy versus Ferguson? or Brown versus The Board of Education? or a handful of other Supreme Court cases? To be fair, his retelling of the Emmett Till story was actually riveting.

The title drew me in, but after listening to it, if Jim Crow era accounts are the basis for the book, then is anyone surprised that there was The Emasculation of the American Negro? Issues that are much more relevant to the legacy of slavery and Jim Crow like police brutality, the war on drugs, and mass incarceration of the young black male seem to be a much better story-line for such a book. However, Epps unfortunately took an unnecessary stroll down memory lane, expounding on material that every child in America learns about before they arrive in Middle School.

Vast amount of information on the horrific treatment of Black people in America. If you are White and haven't read this then you should!