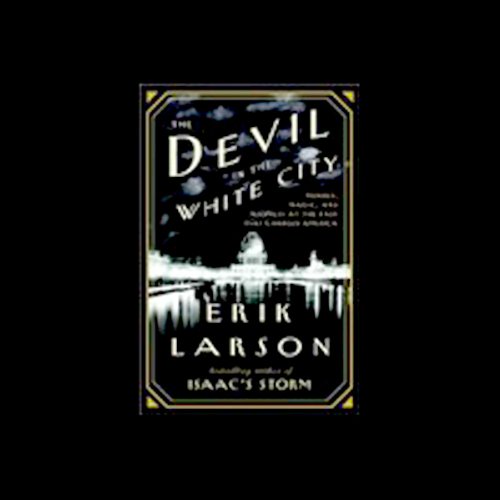 "This is everything popular history should be, meticulously recreating a rich America on the cusp of modernity, in which the sale of 'articulated' corpses was a semi-respectable trade and serial killers could go well-nigh unnoticed." (Publishers Weekly)

Two men embodied an element of the great dynamic that characterized America's rush toward the 20th century. The architect was Daniel Hudson Burnham the brilliant director of works for the 1893 Chicago World's Fair and the builder of many of the country's most important structures, including the Flatiron Building in New York and Union Station in Washington, D.C. The murderer was Henry H. Holmes, a young doctor who, in a malign parody of the White City, built his "World's Fair Hotel" just west of the fairgrounds - a torture palace complete with dissection table, gas chamber, and 3,000-degree crematorium. Burnham overcame tremendous obstacles and tragedies as he organized the talents of Frederick Law Olmsted, Charles McKim, Louis Sullivan, and others to transform swampy Jackson Park into the White City, while Holmes used the attraction of the great fair and his own satanic charms to lure scores of young women to their deaths. What makes the story all the more chilling is that Holmes really lived, walking the grounds of that dream city by the lake.

The Devil in the White City draws listeners into a time of magic and majesty, made all the more appealing by a supporting cast of real-life characters, including Buffalo Bill, Theodore Dreiser, Susan B. Anthony, Thomas Edison, Archduke Francis Ferdinand, and others.

Erik Larson's gifts as a storyteller are magnificently displayed in this rich narrative of the master builder, the killer, and the great fair that obsessed them both.

The Devil in the White Cityに寄せられたリスナーの声

This is an enthralling account of history. I listened to most of it in my car and then when I was on the last disc I brought it into the house so that I could finish. My husband came home from work and found me sitting in the floor staring at the stereo.

I love history! Most of my friends think I'm insane, they never even venture into that section of the bookstore. I've given this book (hardcover version) to several friends as gifts...told them enough of the story to get them hooked and then let them know it was all true.

High School teacher's should use this book to show students that history isn't about memorizing dates and names but about understanding the lives, situations, decisions, mistakes and triumphs of those that came before us...and then using those experiences in your time.

My only complaint about the audio book was that it was abridged...I read the hardcover as well and every word was worth hearing.

Tony Goldman's clear and dramatic reading of this fascinating book was a pleasure to listen to, and the story itself was riveting. I confess to paying closer attention to the depredations of HH Holmes rather than to some of the business dealings around the 1893 Chicago Fair, but the entwined story was quite well done, the historical period came alive in the telling, and I was sorry when the book came to a close, since I'd enjoyed it as a diverting story during long commutes.

Art and Murder in Chicago

Fasinating and educational account of the history and architecture behind the World Columbian Exposition of 1893 in Chicago; interwoven with the story of one of the world's first documented serial killers. You won't want to put it down!

Engrossing account of turn of the century Chicago. Rich with details of the Exposition and the bonus investigation of a psycopathic serial killer.

Where have all the World's Fairs gone?

Frankly, I don't know what was more interesting- the improbability and final construction of the Chicago's World's Fair (you'll appreciate Ferris Wheels in a new way) or the audacity and inherent evil of the serial murderer that Larson describes. Well read and a wonderful account of a moment in history. Check out the pictures on the internet of Chicago's World's Fair- it was really grand.

I guess I wanted more of a horror story

Interesting, but I guess I was looking for something else. Seem to focus more on the building of the world fair than I was expecting.

Two friends recommended 'Devil in the White City' to me and so I listened. Just over 100 years ago, before Ferris Wheels, Walt Disney Land, and reality TV, Chicago built a Worlds Fair and America was enthralled by one of its first pyscopaths. While these two stories are captivating on their own, woven together they feed off of each other and show two men at opposite ends of the spectrum - both trying to push the bounds of power.

I was absolutely captivated by this fascinating tale of murder melded with the history of one of the most influential events in American history - the Columbian exposition. Larson retraces the history of the fair and the chilling escalation of H. H. Holmes' murderous appetite in a narrative that is fast-paced, colorful and captivating. Tony Goldwyn does an excellent job narrating.

I'm glad I chose the abridged version for it had enough detail to follow the multiple story lines. I'm not sure I WANT to know any more about the murders although more about the Exhibition would've been interesting. I'm glad I listened because I knew next to nothing about the White City.

The parts about the architect, Burnham, became tedious... I couldn't wait to hear more about Holmes. Completely brilliant and suspenseful!