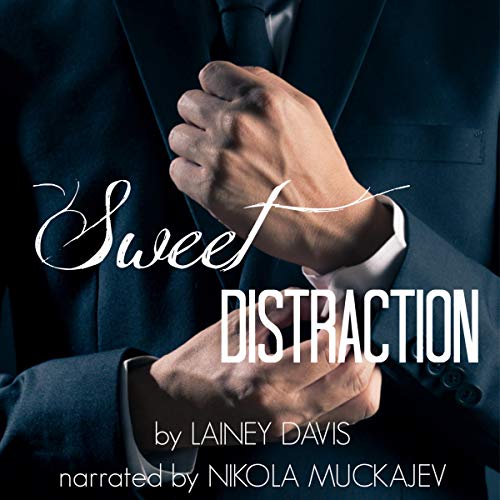 Tim Stag has it all under control...until he hires Alice.

He's taken charge of his family ever since his mother's death, raising his brothers while finishing college and law school early. Now, he runs an empire, and nothing will stand in his way as he looks to expand Stag Law.

And then, Alice Peterson comes along.

The new corporate chef is supposed to give his company an edge, but Alice Peterson is anything but corporate. Wild and spicy as her food, Alice sweeps into Stag Law and drives Tim to distraction. He's not used to distraction.

Sweet Distraction is a stand-alone contemporary romance with an HEA and steamy love scenes. This is book one of a series, so stay tuned to listen about other Stag brothers and the women they weren't expecting to love.

When Tim (Timber), the boss, sees Alice, the new corporate chef, on her hire day, he is taken with her almost immediately. Tim is not used to being distracted but Alice causes this. This was a sweet, hot book that I thoroughly enjoyed. I was kept entertained throughout the entire book and the pace was great. This book also has great love scenes and an HEA.

Nikola Muckajev did a great job with the narration. This is the first book I listened to by him and I thoroughly enjoy his narration. I received this free copy audiobook at my request and have voluntarily left this review.

I thoroughly enjoyed this sweet romance, it is well written with interesting storylines that captivated me from start to end. The characters are likable and easy to relate to. Timber “Tim” Stag is all about work, he sometimes gets lost in work and forgets to eat. His Grandmother recommended hiring a corporate chef so he’ll have food for him and his employees. Alice Peterson recently graduated culinary school and applies for that job, she is ecstatic when she get it. The only problem is the attraction she feels for her boss, Tim, who also feels that attraction. They try to fight it but some things are meant to be. I liked how everything plays out in this book, it is not your typical office romance, it is so much more. I also liked the relationship Alice had with her family and how supportive they were of each other. Great camaraderie amongst the Stag brothers too. I highly recommend this fast pace book, it is potted out nicely and there is plenty of drama, a bit of angst, some heartfelt moments and so hot romance. Lainey Davis, thank you for the great story and the emotional rollercoaster ride.

Nikola Muckajev is a terrific narrator and voice performer. He does a great job portraying the characters, bringing them to life giving each their own voice, personality and attitude. You could hear how much heart he puts into his work as he projects the character’s passion & emotions into his performance. He is an entertaining storyteller and a pleasure to listen to. Thank for you this great listen🎧

love this book. The story is wonderful and so are the characters. Took me a bit to get uses to the narrator but once I did I really enjoyed the narration

Both the author and the narrator are new to me and if I could give this book and the narrator more than 5 stars I would! I love this story of Tim and Alice I really couldn’t get enough of this coupe! I fell head over heels for Sweet Distraction from beginning to end! Both these characters are full of love and just perfect for each other! I absolutely loved the narrator as well! Nikola Muckajev did an outstanding job voicing both Tim and Alice and I enjoyed his voice very much!

Amazing audiobook. The narrator did exceptionally great job by performing all of the characters and I loved every word of this novel. It was somewhat on the shorter side but really just the perfect story while in between other books.

Loved the storyline and it had just enough characters and twists to be interesting! Looking forward to the next book.

I listened to Sweet Distraction and LOVED the narrator. They really brought the characters to life and the sexiness was boosted by their tone.

If you like feel good stories read by a sensual voice, check out Sweet Distraction!

This was a good relatively lite series starter, the characters are good and the story is reasonably believable

The Narration was good

I loved this story it was funny and sweet. the story wasn't over done or exaggerated. it was cute and I really enjoyed the characters and the narrator did awesome job if you like a funny romantic comedy then this is a great book.

Brilliant, amazing and utterly wow. Lainey Davis well done on an amazing book. I can bot wait to get my hands on the second one. I hope that everyone finds love as pure as this, including myself. This was a hot and amazing novel, could hardly stop listening. Nikola Muckajev, what an amazing voice, it was such a pleasure to listen to and well done portraying the emotions and actions of the book. I would gladly listen to his work again. This is a definate must read!!!


Nikola Muckajev narration is excellent. His portrayal of the characters' voices, personalities, and emotions is excellent

Tim is a handsome corporate lawyer , Alice is the hired corporate chef who has a vibrant personality. The moment of Tim sees Alice he is hooked.
This an entertaining contemporary romance, we have fun, emotional, sweet, and steamy.

Tim and alice
I enjoyed this book. Attraction at first sight. Both hard workers. I love all the characters. They have strong family dynamics. Tim and Alice have both dealt with the loss of a family member. There is a slight lack of communication sometimes. We get a HEA. No cliffhanger. No cheating. The narration is great. I recommend this book and I can’t wait to read more about Tim’s brothers.

It wans't my favorite. I mean, I like the listen, it was a quite enjoyable book.

But the one thing I really can't get past is insta-stuff. Here you have insta-lust. Insta-lust is real, you can look at someone and BAM you want to f*ck them, but what really bother me in these case is they loose all their brain cells because of lust. This made the MCs acting more like teenagers than adults.

Putting that aspect aside, I think it was enjoyable and the MCs relatable. It was quick, fun and a beautiful HEA.

The narrator was new to me, but he did a really god job with the MCs voices, the pacing was fantastic and I could feel the emotions the characters were feeling. I would definitely listen to him again!

I was given this audiobook in exchange of an honest review.

Loved this story of a control man letting go and finding his love. Also loved the sense of family.
Narrating was awesome.