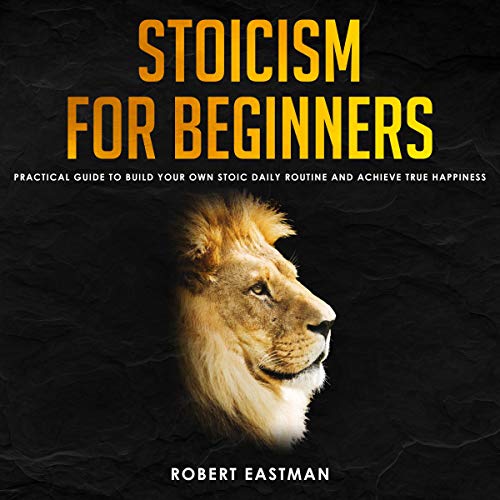 Are you having a bad day? Or even worse than that?

Maybe the promotion didn’t come out as expected. Perhaps your girlfriend or husband has just dumped you, moved out, and took the cat too? Or maybe your dad, who loved you more than anything, has just passed away - heart attack - out of the blue!

Maybe your dog ate the homework again, the class is in five minutes, and that’s your lame excuse, but you’re stuck with it - tough situation.

Maybe it’s that there’s no particular reason at all. You’re just down, once again. Life isn’t serving what you want. Nobody does what you want them to do. And what’s the point anyway?

Of course, you might be a relatively well adjusted human being. Someone who is adventurous and ready for the next challenge, to take life to the next level. If so, stoicism has the answers for everyone.

Stoicism is an ancient philosophy that’s enjoying a wide resurgence of interest in recent years, a philosophy that emphasizes practical application to actual human lives. Stoicism not only helps explain why the world is in the way it is but it also clearly shows how one might live in that world, how to make some excellent lemonade from all those lemons that life has given to you.

Stoicism for Beginners takes you through basic ideas of stoic life, shows you specific and concrete steps that you can take to build an unshakable edifice for your life, a life lived at its deepest and most meaningful levels. Bad days have reached their end.

Best of all, Stoic principles are entirely consistent with the teachings of virtually all worldwide faiths. Stoics are Christian, Muslim, Hindu, Jewish, atheist, and agnostic. There’s even a giant convention, Stoicon, that has rapidly grown into an event that attracts tens of thousands of Stoic practitioners from all over the world.

Something is happening. Those ancient Greeks and Romans were really onto something.

The basic Stoic ideas are, in fact, spiritual concepts that all the world’s prominent faiths build upon. Stoicism assembles these ideas into a coherent program that brings its practitioners to a deeper understanding of themselves and that unruly world in which they live in.

It’s a philosophy that doesn’t come to some abstract conclusions and just leaves it there. What knowledge is good if I can’t put it into practice? Imagine having a guest, giving him or her an empty cup, pointing to some lemons and having him to make something out of it? Well, stoic practice gives you a cup full of delicious lemonade that will transform your life.

I love it and following this guide audiobook.

The audio book is well spoken and easy to understand the basics and connects easily with Stoicism for Beginners. Thanks to that, I can unlock many of its functions and use utility services for personal life.

I really appreciate this audible.

This is a fascinating perused that truly gives a great deal of detail on Stoicism, and furthermore gives truly cool history behind the people that assumed a job in it all through the ages.

A very simple and well-spoken this audible.

I would recommend to anyone wanting to change their life for the better. Simple and easy to grasp. Deep and moving.

Excellent audio book interesting and easy to follow and understand the fundamentals of stoicism. For stoicism listen audio book making this introduction to stoicism interesting.

I must say this is the most simple good to listen.

This is the most simple good to the stoics i have find. It is also very actionable. The listen audio book style and easy to follow rhetoric. If you are starting in the journey of the stoics,

A good listen that reduces the stoicism audible.

A good listen that reduces the philosophy of stoicism to understandable proses leaving out the academic jargon.

The narrator is so dry, slow, and sometimes unclear. It's often difficult bro get through a session.

To improving your self discipline,mental

The author put a lot of research behind his work and wrapped it together to make an edifying and viably listen text.To improving your self discipline,mental durability this book work a perfect guide.The substance of this book was so normal to seek after.

guide for beginners to improve self-discipline

I am glad I listen this book and I listen through it very quickly because it was so informative. If you are interested in stoicism or looking that type of information then it is best book for listen.

implementation of the stoic philosophy

Excellent book combing modern and ancient visions of Stoicism. While it is geared towards legislators and leaders, any reader will be able to leap forward in their understanding and implementation of the stoic philosophy.

This is a good Audio book stoicism for beginners and a good refresher for those who are more experienced. I gave this Audio book to my teenage son and he has enjoyed as well and it did enough to peak his interest even further.

Fully satisfied by using this one!!

Excellent Audio book interesting and easy to follow and understand the fundamentals of stoicism. Thank you Robert Eastman for making this introduction to stoicism interesting. I couldn't put it down until the end.

A very quick and easy to listen

This Audio book was easy to listen and at the same time provided a lot of down to earth information for the person interested in a better way of life.

introduction to Stoicism as a life philosophy

This book provides a great introduction to Stoicism as a life philosophy. If you are interested in stoicism or looking for a type of philosophy for self-improvement, this is a good book to read. Recommend it for everyone!

the structure style and the speedily consumable

A Great listen The concise clearness of the structure style and the speedily consumable substance made this extraordinary book of old, yet simultaneously relevant perspective, absolutely an enjoyment to scrutinize and go over. I genuinely took pleasure in the updates and tone.

helps one learn and practice the teachings

Absolutely amazing guidebook. I listen this book all of the chapters overall great I can know lots of things./ The book is listen as a historical document outlining the birth of stoicism and its practice in Western culture, while at the same time, teaching the tenants of its philosophy in clear

Complete Guide to Stoicism does an excellent

This is a very readable book. I found this book lots of things like self-discipline, mental toughness, leadership, wisdom, Etc. The author well explanation all of the information very easy to understand. A Complete Guide to Stoicism does an excellent job of explaining the philosophy and history of Stoicism.

This is absolutely the best one.

The substance was clear and brief, and a peruse with next to zero past philosophical information ought to most likely comprehend it. In addition, I have arrived at the resolution that any individual who blames this audiobook or the subject is likely in its most need! You may like it. It might even transform you.

I listen to this audiobook and I get

A quick intro to Stoicism that is reflective of the author's minimalist lifestyle and obviously a Complete Guide To Stoicism and has a nice solid grasp of the subject. I listen to this audiobook and I get this audiobook so much helpful. While the philosophy is quite complicated

how to apply this philosophy to daily life.

This books explains the history as well as the tenets of Stoicism. I like how the book gives modern day examples of how to apply this philosophy to daily life.