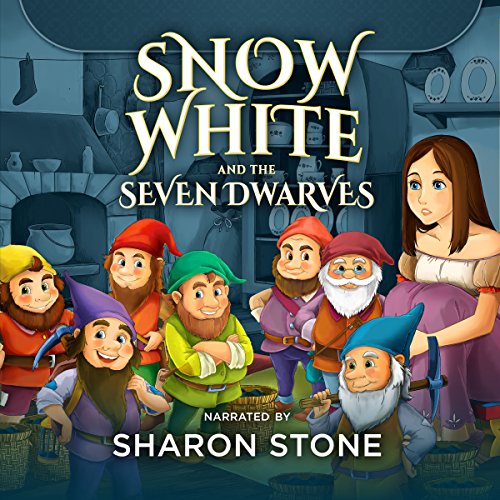 Snow White and the Seven Dwarfs: The Classics Read by Celebrities

This retelling of the Brothers Grimm's classic tale Snow White and the Seven Dwarfs is read by Sharon Stone, an American actress, film producer, and former fashion model best known for her Oscar-nominated role in the film Casino, for which she won a Golden Globe.

When the stepmother queen, who thinks much of her own beauty, hears the magic mirror proclaim that not she but Snow White is the fairest in the land, she jealously plots to destroy the young girl. But beautiful Snow White finds protection in the woods living happily with the seven dwarfs - and ultimately living happily ever after with the handsome Prince.

Fun Reading of a Classic

Sharon Stone gives a fun reading of this children's classic. My kids love it and ask for it time and again.

My daughter is a regular chatterbox, stayed quiet for the entire book. She loves it and she remembered the repetitive sections!

Great story and perfromance. The kids love it!

It's a very well made audio- book, interesting to young and not so young ones.

Sharon Stone Knocked it out of the Park!

Such an amazing audiobook. The music and sound effects had me so excited and intrigued, even though I already knew the ending of this classic tale. Sharon Stone did an amazing job with this audiobook and I can't wait to listen again and again with my future kids!

Not good for small children

I downloaded this for my granddaughter. It was very scary and explicit about killing Snow White. I would not recommend for young children