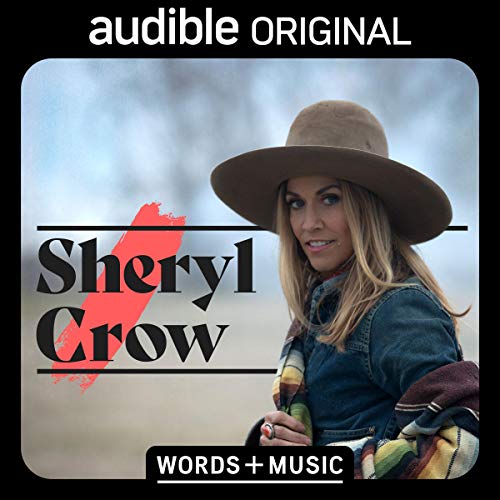 “My music has been a great resource and cathartic tool, but also something I’ve hid behind.”

Revealing, intimate, and exhilaratingly raw, celebrated songwriter and acclaimed singer Sheryl Crow’s Words + Music provides the perfect canvas for the nine-time Grammy Award-winning artist to showcase her potent talent, articulate her complex inner workings, and breathe new life into a sizable stack of her most beloved tracks. Part of Audible’s rapidly expanding Words + Music series, blending storytelling, music, and performance to create exceptional listening experiences, Crow’s session is marked by gorgeously stripped-down versions of the songs that made her a household name (exclusively recorded for these sessions). The tunes punctuate rich storytelling, as she dives deep into the history of her career, reexamining the personal experiences and relationships that impacted her artistic journey.

“My journey is my own”, Crow says. “I mean, it's definitely not without some detours and definitely not without some hard lessons”. True to form, Crow leads us through her winding road to success - maybe more accurately defined as a series of jolting roller-coaster rides, as she recounts all the fits and starts, the feverish highs and lows, that have come to define a career now in its fourth decade. Featuring stunningly crisp, yet lo-fi renditions of eight songs including, “If It Makes You Happy”, “All I Wanna Do”, “Leaving Las Vegas”, “Strong Enough”, “My Favorite Mistake”, and George Harrison’s soulful “Beware of Darkness”, Sheryl Crow lays herself bare. From her early days in small-town Missouri where she sought salvation from her melancholy by turning to mystical rockers (Stevie Nicks and Zeppelin, most notably); to pursuing her dreams, and in quick fashion landing the spectacular gig as one of Michael Jackson’s featured solo vocalists on tour. (A career catapult that quickly became a cautionary tale.)

From the crushing weight of perfectionism and loneliness, to the joys of finally finding kindred musical spirits - only to have it all crumble, just as the music was skyrocketing, the toll of her volatile ascent to stardom comes into focus. In a particularly fascinating section, she revisits the total sense of peer disconnect during the height of her records’ success as her style was painfully incongruent with the greater musical landscape at the time. This, subsequently leading to an “adoption” of sorts by an older, more simpatico class of musicians - luckily for her, they doubled as her heroes: Nicks, Keith Richards, and Dylan among them. In another poignant moment, Sheryl lets listeners in on the dysfunction and emotional reckoning that came after her well-publicized romances with Eric Clapton and a few years later Lance Armstrong.

In just an hour and a half, Sheryl Crow manages to transform before our ears: from a well-known artist to human being we now know pretty damn well. That’s not easy to accomplish. And perhaps most extraordinarily, we are left with a lasting gift: beautiful songs we entered knowing become beautiful songs we now understand.

I forgot how much I love Sheryl Crow. Growing up, I really related to her music. I felt the melancholy she talks about. Probably why I loved her music. It’s nice to hear a little about her story. It gives me hope and faith that there are better days to come and not everything has to be figured out right now. Thank you Sheryl for sharing your story.

I listen to something almost all day, every day at work. I get podcasts elsewhere and come to Audible for audiobooks. That’s my habit. Today I finished an audiobook and all the pods were depressing news. I started to listen to music instead but came back to Audible and saw this short piece. I was immediately entranced with the combination of great music and an interesting history.

I’m not sure how common these productions are but I’ll listen to as many as you can produce. I love this idea. Thank you.

To all of those that came up with this idea ... Incredible! As Sheryl says, the world is different, and that includes how we receive music and its poets. Everything I want is in this format! The who, what, when, where, and how in a little over 60 minutes.

At 68, I didn't know a lot about Sheryl Crow. Snatches of lyrics I recognized ... Appearances on Oprah ... Lance Armstrong ... Today, I know who and what and how it happened. I see the thread that connects this artist to those I admire and hold dear for their contribution to my life. And I am heartened that the thread continues to produce voices that tell our stories. Thanks, I will be bingeing the unknown (to me) works of this artist to hear what else I missed of her journey, and I do it with her personal roadmap of reasons, motivations, and inspirations that make sense of the musical story she's destined to tell.

I’m truly inspired and appreciate the inside look at a bold and courageous woman’s career. Beginning with a naive moxie, and not ending, but continuing with wisdom and an inner strength that always has been the foundation of Sheryl’s existence. Thank you, Sheryl Crow, for sharing your story. Keep singing sister—the world obviously loves your voice.

Sheryl Crow is my favorite female vocalist. Her style, to me, is lyrical storytelling from her life experiences. What makes this particular program so special is her singing. There are no backup singers or special effects, but mostly Sheryl and her guitar. I especially liked this version of All I Wanna Do and Redemption Day. Just her beautiful voice and you.

All I can say is I hope alot of people listen to this. I was lucky enough to have some very good headphones and could appreciate the music as well as all the words. Thanks so much for sharing. I laughed, I cried, and I really loved this production.

I always loved her, but even more now! I really enjoyed this. Thank you, Audible!

I love Cheryl. One of those people who make up the sound track to pieces of your life. This is a treasure I will listen to over and over.

Loved the music and her open, honest reflections on her lifetime of living and growing. I will probably listen many times more.

Fascinating but I just wish it was longer!

I'd love to hear a full audiobook of Sheryl talking about her life and career.

The journey of life and seizing the moment.

From "crashing" a Michael Jackson audition, leading to the need for a passport and enjoying the rides all night at Disneyland Paris.
The depression generated as a consequence of sexual harassment, powerfully articulated in What I Can Do For You and The Na-Na Song.
Beautifully articulates the journey of her life, and the acknowledgment that she remains a work in progress.
Guided by the necessity to both work hard and be a good person, and will now release contemporary songs with a pertinent message and no longer rely on the album format, in this playlist dominated environment.
Raw, honest and powerful, with some fabulous new arrangements of some of the classics from a four decade career.
Offers an incredible insight into a phenomenal talent, who is so real and ordinary and says it like it is.