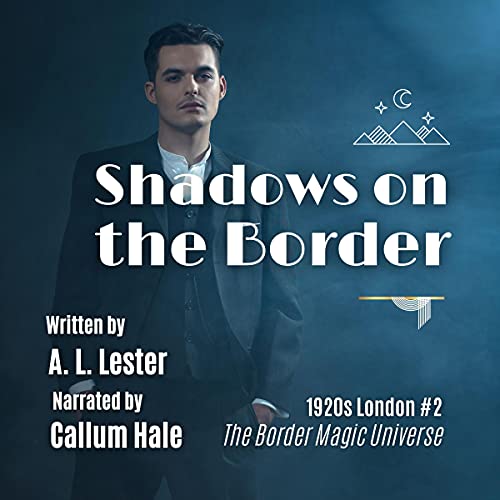 Newspaper reporter Lew Tyler and his lover, Detective Alec Carter, are working out the parameters of their new relationship. Meanwhile, time traveler Lew is trying to decide whether he wants to stay in the 1920s or find a way to get back to 2016, and Alec doesn’t know if he can bear the vulnerability of being in love with someone who uses such dangerous magic.

Fenn is a Hunter from the Outlands, come through the Border to search for the murderous Creature and its offspring at the behest of the Ternants, who maintain the balance between Fenn’s world and ours. Fenn strikes a bond with Sergeant Will Grant, Alec’s second in command, who is keen to learn more about his own magical abilities. As time goes on, Will grows keen to learn more about Fenn, as well.

Fenn has their own painful secret, and when they appear to have betrayed the team and goes missing in London, Will is devastated. He has to choose between following his heart or following his duty.

Moving through the contrasting rich and poor areas of post-First World War London from West End hotels to the London docklands, the men need to work together to capture the Creature...and choose who - and what - is important enough to hold on to and what they may need to give up.

The second book in the 1920s London Lost in Time trilogy, part of the Border Magic Universe.

I will be starting book three as soon as I finish writing this. The characters and setting seem so real and the narrator uses the perfect accent for England in that era.