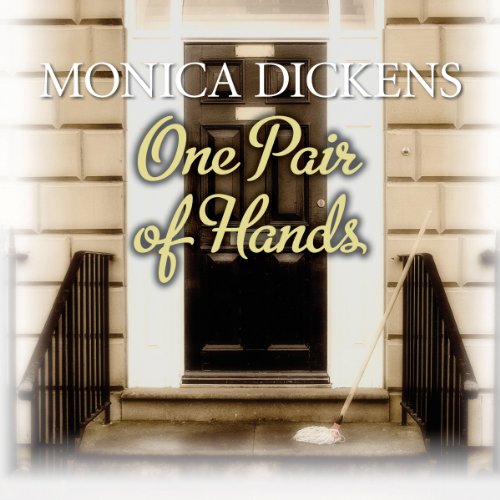 One Pair of Hands

Unimpressed by the world of debutante balls, Monica Dickens shocked her family by getting a job. With no experience whatsoever, she gained employment as a cook-general. Monica's cooking and cleaning skills left much to be desired, and her first few positions were short lived, but soon she started to hold her own.

Monica discovered the pleasure of daily banter with the milkman and grocer's boy, and the joy of doing an honest day's work, all the while keeping a wry eye on the childish pique of her employers. One Pair of Hands is a fascinating and thoroughly entertaining memoir of life upstairs and downstairs in the early 1930s.

I could listen to Carole Boyd read the phone book

I needed a simple story and this fit the bill. An amusing little story with not a lot of twists and turns.

Read the print edition years ago

and liked it, so thought I'd try the audio edition this time. Carole Boyd was a perfect fit as narrator, truly enhancing my enjoyment of the story!

If you could sum up One Pair of Hands in three words, what would they be?

I didn't find anything moving,it's not that kind of book

It had a vein of patronising the servant class in it I thought,rich girl from good family slumming it while at the same time doing someone who may have actuall needed work out of a job.Nevertheless it was entertaining.

What did you like most about One Pair of Hands?

Dickens goes into service despite being from an upper middle class family herself. At first she is intrigued by the working classes. The variety of characters are amusing. The book shows us the social context of the time - the 'servant problem' is depicted differently in the different households she encountersl

I liked the character depictions the best. Working class folk are depicted as gossipy, body focussed illiterates with a slight immorality about some of them - there are hints of theft, affairs and sexual liaisons. However the wealthy upper classes are depicted as gossipy, society focussed, shallow, with a fickleness to them and an immorality to them - there are hints of sexual liaisons and corruption.

The introduction is funny.

Her exhaustion while at the Vaughan household made me realise how difficult the life in service was. Days from 7 a.m to 11 p.m made the people exhausted and depressed. When she passed out while at the dance club it moved me to think of her so tired and so underappreciated.

The book is often criticised as having no story - but it is a biography. This is the story of Monica's time in service. It's a selection of chronological memories of her encounters. Each house is slightly different and she slowly realises the truth of a life in service. Her awakening at the end is uplifting but it does make you wonder about the women and men who couldn't just pack it in if they got bored. Many had to stay in the life of drudgery and hardship with bosses who worked them too hard.

a descriptive novel of life in service 1918

A very entertaining and interesting account of a society girl plunging into the world of service.
Very human and believable.
Carol Boyd is an excellent narrator with an expressive voice and great characterisation.

A trip down memory lane, I have all the Monica dickens in print, but thoroughly enjoyed listening. Carol Boyd, an inspired choice for a narrator, beloved of the Archers too. Have now downloaded One Pair of Feet. Excellent use of a credit...

No I wouldn't recommend it. There was no storyline to the novel at all. It was just a series of jobs that the main character took on. She had no friends, family, relationships and no personality whatsoever. However, it was quite amusing in parts.

What could Monica Dickens have done to make this a more enjoyable book for you?

The narrator was very good. She was good at doing different voices and accents. She did very well considering. However, the main character in the book was supposed to be in her mid 20's and the narrators voice sounded a lot older than that. Apart from that, I could listen to her narrating another book.

Did One Pair of Hands inspire you to do anything?