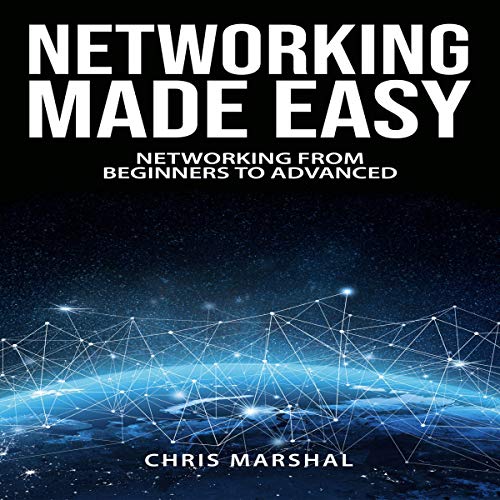 What if you could help your business grow improving data storage efficiency and volume?

Imagine if you could do that while accessing to these data with more flexibility and cutting costs on software in the same time...

This could be possible thanks to what you’ll learn with: Networking Made Easy: Networking from Beginners to Advanced by Chris Marshal.

Networking, also known as computer networking, is the practice of transporting and exchanging data between nodes over a shared medium in an information system. Networking comprises not only the design, construction, and use of a network, but also the management, maintenance, and operation of the network infrastructure, software, and policies.

Networking Made Easy will let you fully understand how to networking.

Here’s a little preview of what you’ll find:

Chris Marshal was born in 1983 in San Francisco, California. At the age of 21 Chris started to work as a promoter for a local t-shirt shop and his ability made Chris be noticed by an international company.

His passion and continue training let him become a social media marketing specialist for the company and also let him create an effective computer network for the company.

Networking Made Easy: Networking from Beginners to Advancedに寄せられたリスナーの声

This audible keeps maintaining its knowledge

A new puppy is a huge responsibility and if you own one , you are responsible for its training.I listen a dog for my kids and they were very happy but no one wanted to train him.

It is a perfect audio-book to inspire

I will study computer networks, understand how they function, and how to quickly customize them. There's so much detail in this audio-book that makes the beginner understand.

This audio-book really help me take the next step

This audio-book is strongly advisable to all

The recording of the audio-book is complete and is revised. I enjoyed it, it's more than anything else. I'd certainly recommend this to someone who wants to learn more about networking, easy to capture, lots of detail.

This audio-book is the perfect guide for everyone

Nice recording on networking audio-books. I like the OSU model diagram too, it really shows you a fantastic graphical model representation of how it all fits together.

I'd recommend this guide to everyone

This recording of an audio-book is an unexpected networking method. I have so far really enjoyed the details and style in which it is provided. Simple appetizer to the main course, but nice little.

That's exactly what I'm looking for!

There are suitable analogies to real-life scenarios and network principles, helping me to embrace the interpretation and quickly recall the content being recorded of audio-books.

This audio-book is an excellent way to learn

Especially the Computer Programming For Beginners I found the audio-book very fascinating. One of Java's best comprehensions Knows The Fundamentals. This is such a convenient way of achieving consistency in performance.

Important content which is wonderful. Highly recommend for those who want to reinforce their understanding in intro to networks. All the basics explained very well.

This audible was an eminent instructor for all of.

This audible was an eminent instructor for all of. This audio book most practical and down to earth so far. its provide a good information.

An excellent way to assure this topic.

An excellent way to assure this topic. Really, i'very impress to listen this audio book. Well spoken and thoughtful.

This audible is engaging in-depth on this theme.

This audible is engaging in-depth on this theme. Purchase this audio book on the off chance that you need to comprehend what systems administration is.

Those actionable phrases help me a lot.

An incredibly important audio book. There are lot's of information included this audio book. Anybody and everybody should listen this audible.

The audio book is spoken is such a good way, so easy to understand and the provided examples make it even easier to comprehend this subject.

It gives us a practical and logical explanation.

It gives us a practical and logical explanation. This audio book give you a basic understanding of networking and setting up routers and switches.

Everything listen in this audio book makes sense.

A very simple and well-spoken this audible.

A very simple and well-spoken this audible. Many thanks to the author for giving us such a beautiful audio book.