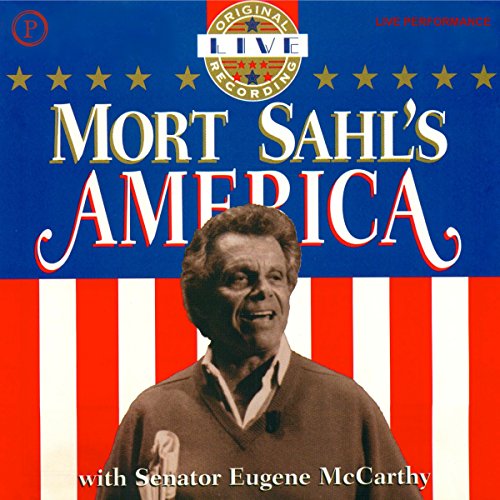 "Sahl's greatest gift as a performer is his ability to speak to the audience as if he is having a one-on-one dialogue with someone he respects." (Variety)

In Mort Sahl's America, the sophisticated, political satirist exposes the grand follies of the powers that be. He tips his dagger towards liberal or conservative, from Robert Dole to Bill Clinton, from Jesse Jackson to Al Gore, no one is spared. Sahl takes his audience on an incredible trip back to Barbra Streisand's 1992 fundraising extravaganza for then Arkansas Governor, Bill Clinton, relaying Streisand's analysis of each of the party's attendees. He talks of his frustrated relationships with liberated women and shares his thoughts on gay marriage and Catholic priests. As an added bonus, Sahl shares the stage with Senator Eugene McCarthy, whose bid for the 1968 US presidency ran on a platform which opposed the Vietnam War. McCarthy offers wry reflections on Lyndon Johnson's eccentric behavior and shrewd commentary on Robert McNamara.

Mort Sahl has been described as one of the greatest political and social satirists of the 20th century. Sahl wrote jokes for President John F. Kennedy and helped host the 1959 Academy Awards. When his face adorned the cover of Time magazine, its headline hailed him as the "patriarch of a new school of comedians." A bootleg copy of one of Sahl's performances is preserved in the Library of Congress as "the first recording of modern stand-up comedy." And it was Mort Sahl who inspired an 18-year-old Woody Allen to become a stand-up comedian. Speaking of Sahl's style in a 2012 interview, Allen said, "It just completely changed the history of comedy, if one could use the cliché, it changed the face of an art form."

What did you love best about Mort Sahl's America?

Have you listened to any of Mort Sahl and Eugene McCarthy ’s other performances before? How does this one compare?

First listen to Sahl's commentary, then to find it more insightful and hilarious during a second listen, swap out the names with current Politicos. An eerily predictive and sadly accurate assessment of modern American politics...only the names have changed.