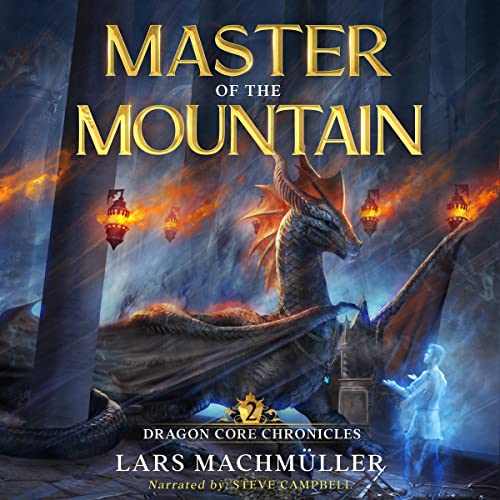 Master of the Mountain

One deadly competition. A mountain of dragon dungeons. Participation is mandatory.

Through clever usage of construction techniques as well as ham-fisted applications of force, Carl survived being reborn as a shadow dragon inside the Scoured Mountain. The future is looking bright for him and his band of trash-tier minions, and they’ll have ample time to decide exactly which kind of society they want to build in this violence-filled world.

There’s just one tiny problem. Only one dragon gets to be in charge, and every single other dragon from his clutch survived as well. Now that they’ve gotten to this point, they need to play a little game. The prize is survival and a questionable promotion. Carl's already ahead of the competition because of the questions he gets to ask the mysterious, glowing human trapped inside his domain.

He's going to take every advantage he can get.

Pretty good, bloopers make the audio book even better to enjoy. Am a big fan of the narrator.

Compliments to the chef I love this.

Unlike many other stories in this genre the plot moves forward and doesn't get bogged down in over zealous details. The journey might actually end up somewhere instead of burning out after 5 books or so. It's entertaining as well which is a pleasure.

This was a great second installment of what I hope continues on to be a fantastic series. The author carries the story over nicely and brings his detailed but compelling action scenes thru as well. There is lots of character growth without feeling forced and some nice world building as well as new characters to love and hate. Will be reading the next one of the series when it drops!

Dragon on the move

Master of the Mountain

Carl has survived his first major test as a dragon and his minions are far stronger than they used to be. He still has to worry about the other dragons in his clutch. Everyone would expect a Shadow Dragon to lair up and perfect his defenses. They would never expect him to go on the offensive.

While this is obviously a dragon book, the book changes perspective as the book goes along. It starts out as a domain (dungeon) builder, than goes to an adventure story. Tim is a great addition to the story! I only wish that he was in it more.

I really love everything about this book! The author's done an excellent job in keeping the story very engaging. I've been completely hooked. The story's well-written, action-packed, witty, funny, and oh my god heartbreaking. Yes, heartbreaking. This one broke my heart into tiny million pieces and I don't know if I'll ever recover. *hugs all the the Talpi*

Listening to this story is just painful. It is less of a story about dragons and more of the author talking about their own life, or something close to it.

I came here for dragons, not for construction workers and constant references to their ex wife. Seriously.

The audio work on the other hand, is pretty good.

this one got my feelings so hard...
holy heck...
well written and better performed...
I want more!

After the first book, I had a totally clear idea how the story would evolve and continue - and it turned out I was copmletely wrong.

The narration is good and I like the various voices. The world building continues and The Mountain is well explained.

The middle part of the story was a bit of a turn off, I didn't really like the bad guy.

But the ending picks up speed again and is really good. There's some great unexpected turns in this story.

Looking forward to the third.

I def enjoyed this book but I have to admit the tempo of the book was rather docile except maybe the end “boss fight”. Not that the tempo was bad or anything, it just wasn’t this epic adventure I was expecting.

That being said, I enjoyed the story and character progression. And I look forward to the next book in the series

The performance from the narrator wasn’t bad, but it wasn’t great either. I’m not too familiar with this narrator and although he does have a number of different voices that work well, he just doesn’t have the gusto I’m used to. Let’s put it this way, he’s good but he’s no Travis Baldree!!!