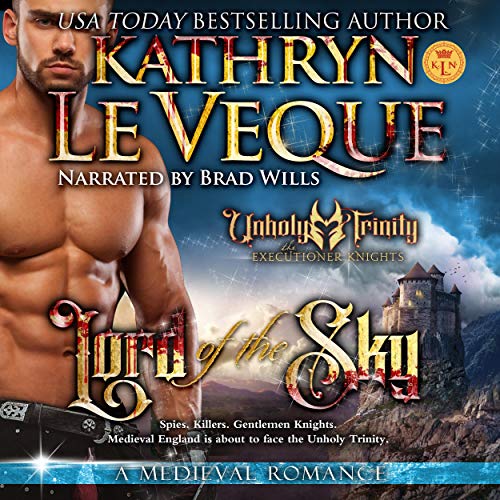 Lord of the Sky

1217 A. D. - executioner Knight Kevin de Lara finally has his moment to shine.

Kevin de Lara breaks out from under his powerful brother's shadow (Sean de Lara from Lord of the Shadows) and becomes a great knight on his own. But there's just one problem...the woman he loves may very well cause his downfall when one strategic lie begins to unravel....

Since reconciling with his brother, Kevin has become a powerful garrison commander along the Welsh marches for the de Lara empire. As an agent of William Marshal, his directive is to keep the local Welsh barons under control at all costs, and Kevin becomes a diplomat.

But the Welsh lords only tell him what he wants to hear. Secretly, they are planning a rebellion to gain back de Lara properties they believe belong to the Welsh.

Juliandra ferch Gethin is a daughter of two worlds - a Welsh father, an English mother.

Juliandra’s father has committed an offense against the de Lara empire and has consequently been jailed. When Juliandra disguises herself as a servant and sneaks into the castle to free her father, she can’t get past Kevin. When he discovers her true identity, he formulates a plan to marry her simply to keep her father and his allies under control. It’s a tactic and nothing more.

Or so he thinks.

Sometimes the arrogance of a man is only exceeded by his love for a woman.

Join Kevin and Juliandra on their journey of rebellion, redemption, and the realization of a love that cannot be denied. Kevin married Juliandra to control the Welsh, but it’s very possible that she may be the one controlling the English...through him.

Lord of the Sky is a love story you won’t want to miss.

What a great story! I loved the plot and the characters, especially the brothers. And as usual Brad Wills gives an outstanding performance! So darn good!

Lord of the sky

THEY ARE ALL EXTRAORDINARY BOOKS. LOVE THE NARRATOR! KEEP THEM COMING. BOOK 7 IS MISSING THOUGH IN THE EXECUTIONERS KNIGHTS AUDIBLE.

Have listened to many Le Veque books. This one among the best. Narrator outdid himself. Solid story. Didn’t realize eight and a half hours could fly by so fast. It was that good.

I hope there is another book after this because the series is so good. The story of Kevin and Juliandra is emotional and you can understand the chain of events. This story is not as brutal as some of the other stories but the excitement is still there. Enjoy.

Kathryn never disappoints when she writes a book! This is an amazing emotional tale of Kevin de Lara, the youngest of the brothers.
Brad Wills is my favorite narrator of her stories. He can drag me into every character! I loved his singing and admire his ability to make me smile, laugh, cry and know each person with just his voices!

Lord of the Sky?

I suppose the story would be good coming from any author but Kathryn Le Veque.. I expect more substance and more depth to her stories which was lacking in this one. I am very disappointed.. Brad Willis is an exceptional narrator as always