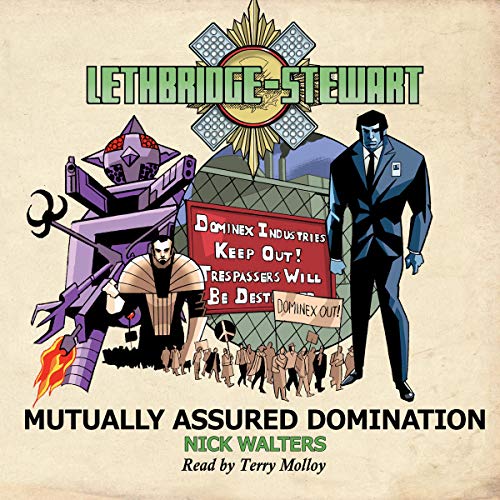 The fourth book in the Lethbridge-Stewart novels series.

The Dominators, the Masters of the Ten Galaxies, have come to Earth and brought with them their deadly robotic weapons, the Quarks!

It's the summer of '69. Flower power is at its height, and nuclear power is in its infancy. Journalist Harold Chorley is out of work, and Colonel Alistair Lethbridge-Stewart is out of sorts. Dominex Industries are on the up, promising cheap energy for all. But people have started going missing near their plant on Dartmoor. Coincidence, or are sinister forces at work?

Join Lethbridge-Stewart and uneasy ally Harold Chorley as they delve into the secrets behind Dominex and uncover a plan that could bring about the end of the world. A brand-new series of novels set just after the Doctor Who serial The Web of Fear, featuring the characters and concepts created by Mervyn Haisman and Henry Lincoln.

Terry Molloy is an experienced radio and television actor. Most notably he is best known as Mike Tucker in BBC Radio 4's The Archers, while on television he played the Doctor's evil nemesis Davros during the 1980s. He has also recently appeared on BBC 4Extra in the role of Professor Edward Dunning in The Scarifyers, produced by Cosmic Hobo Productions.

Another great adventure with the Brig!

A further fun and well written tale of Lethbridge Stewart now going up against the ruthless Dominators and their deadly Quarks. Some fun homages to several classic Who stories here. Not to mention some more pre UNIT and post "Web Of Fear" storytelling for the Brig.

This the fourth Lethbridge-Stewat spinoff story I have read. It has all the ingredients for a great retro UNIT style story. Colonel Lethbridge-Stewat is at his resourceful best against a very sixties Doctor Who foe. The Dominators and their Quark droids. A secret uncanny run complex on a remote Devon moor grabs the attention of journalist Chorely. A character from The Web of Fear. Fabulous climatic ending in good old fashioned UNIT style. Great escapism in 60s Britain. 😀👍

Good Dr Who style romp. Sees the Brigadier as a real action hero. Focuses more on the action then the previous books. Terry Molloy is a good narrator.