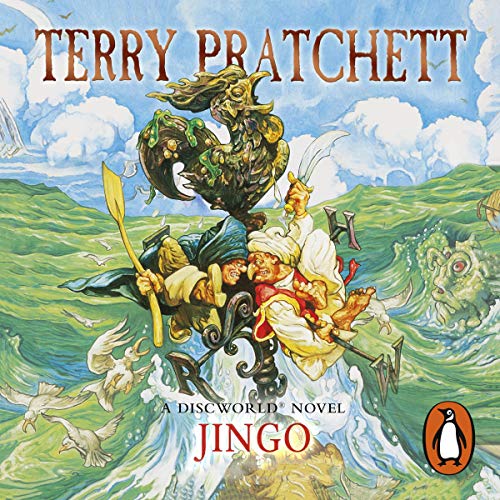 A weathercock has risen from the sea of Discworld and suddenly you can tell which way the wind is blowing.

A new land has surfaced and so have old feuds. And as two armies march, Commander Vimes of Ankh-Morpork City Watch has got just a few hours to deal with a crime so big that there's no law against it. It's called 'war'.

He's facing unpleasant foes that are out to get him...and that's just the people on his side.

The world's cleverest inventor and its most devious politician are on their way to the battlefield with a little package that's guaranteed to stop a battle....

This is the 21st volume in the Discworld series.

Please note: This is a vintage recording. The audio quality may not be up to modern day standards.

"Nigel Planer is a stunning narrator in these stories, delivering a wide range of voices and styles while remaining wonderfully energetic and consistent." (Library Journal)
"Anyone who doesn't mind laughing themselves silly at the idiocy of people in general and governments in particular will enjoy Jingo." (Amazon.com)

Would you listen to Jingo again? Why?

One of the funniest Pratchett stories. Had me rolling with laughter at times.

Have you listened to any of Nigel Planer’s other performances before? How does this one compare?

What you see is what you get

When you listen to a watch novel from the discworl you know excactly what you're gonna get and thats pretty damn satisfying.

Laughed out loud too many times to count

Exceptionally incisive, hilarious and a study of human nature at its best.
Loved it !
A must read for anyone that likes satire. A lot of the usual characters make an appearance.
The way he explains the concepts of war, of how 'different means dangerous' is just amazing. Of course you will be laughing all the way at the brilliant wit, fast paced plot so that you won't see the twists coming.
A suffering Vimes, a smug Vetinari, the always innocent Nobby and so much more !!

This file is badly converted from audio tapes. There are frequent squelch noises throughout, and at least one instance of "end of side 14" was left in during the conversion.

This was my first audio book, normally I prefer full cast productions, and despite Nigel Planers excellent reading i was still left unimpressed. Oh well to each their own.

Sam Vines is a great character!

Love it! My sister always said Commander Vimes was her favorite Discworld character, and after this book, I finally understand why!

A fun continuation of the Watch storyline. I love Nigel Planer's voice acting which gives real colour to the characters.

A book for the times

I am very glad I read this book now although I would have probably felt the same at any other point in our history, which is sad reflection on the constancy of xenophobia and jingoism. Listen to this book to see a reflection of our own ugly selves.

Another great book in the watch series with excellent narration by Nigel Planer as alway. These books always get me in a good mood.

Yet another great story by Pratchet

Would you listen to Jingo again? Why?

I've already listened to it twice and will repeat in few months time for sure.

Captain Carrot. He is always so diligent.

The way he impersonates every single character

"If the enemy has an impenetrable stronghold, see he stays there"

How do you get a donkey up a minaret?

If you love the Patrician (and I do) you will love the donkey bit of this ridiculous, but wonderful story of Samuel Vimes's trials at war in the desert. All your favourite Ankh Morporkian characters go to war. Nobby discovers his female side,Leonard de Quirm invents a submarine, Colon is........Colon.........and all ends happily, after a fashion. And if you ever have to get a donkey up (and down) a minaret, then the answer is here, too.

The humour and twists and turns. Always taking you to a new place in his imagination.

That constant urge to get back to the story when you had time to enjoy it. The colourful characters, fantastic humour and brilliant twists and a nod to I am guessing, De Vinci

Which character – as performed by Nigel Planer – was your favourite?

Cant get enough of Terry's books

Good, but not my favourate Terry Pratchett book

I enjoyed this book, like all of TP's discworld books, but this one wasn't quite as good as some of the others.
Nigel Planer is a good narrator but again I prefer Stephen Briggs and Tony Robinson when listening to TP.
Overall, it's a good listen, so please don't let my opinion put you off; if you like Discworld books you'll like this one as well.

Pratchett &Planer, masters of their craft, what a shame the editing was so poor :(

Not my favourite disc world

Struggled to follow the story really, and not that funny. But its the only one so far out of the first 20!!

Excellent example of the Disc World universe with lots of humour. The performance was OK but fell into the usual trap of too many silly voices. Disc World is not pantomime.

all the usual suspects from the guards,they just keep getting better and the story is brilliant too.

Nigel Planer makes hard work of an otherwise brilliant book. Some of the voices aren"t convincing

one of my favourite Discworld stories. digs deep into the inherent insanity of war and racism

Superb book. It needs to be put into chapters. That's the only thing that spoils it.

Vimes and Vetinari at war

Ankh-Morpork goes to war against Klatch. Great performances by Vimes and The Watch. Nigel Planer's narration has great range and makes listening a pleasure.

Love the mystery and adventure! A great insight into war, and the nature of people. Great narrator too.

loved it, but in the processing from tape or CD they have not taken out side 14 announcement.