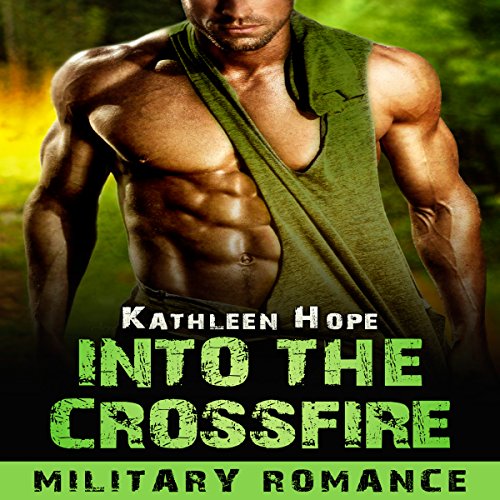 The whir of the helicopter drowned out every other noise around Caleb, even his own thoughts. It was a welcome respite. An intricate web of tactical planning had filled the recesses of his mind for the past 24 hours, but it was time. No more planning. It was another routine operation; go in, grab the bad guys and get out. He knew each move he was about to make, and every single step the seven men sitting next to him would take. He was sure of it; it was his job. He was responsible for the safety and well-being of every man in his squad, and simultaneously, for the success of the mission at hand.

"Five minutes, Lieutenant," the man seated in the pilot seat hollered back to him, breaking up the monotonous whir.

Every man around him straightened his spine and their muscles grew taught. It wasn't fear that had them at the ready, it was anticipation; the same anticipation that surged through his veins. In four minutes and 39 seconds, they'd be on the ground. In 15 minutes and nine seconds, they'd be in position, a mile and a half away from the landing zone. Within 30 minutes, their task would be complete: suspects apprehended, intel gathered and building secured. The 2,000 kilograms of cocaine housed in the building wasn't his problem, only the men selling it and their list of buyers. "Just get those bastards, Caleb," his S.O. had told him. "We'll clean up their mess later." In other words, another team would be deployed to round up the drugs once the area was secured.

This is the second one I have listen to from this author and narrator I must say I enjoyed this one much more than the last. What is filled between the pages you are a little bit of everything from secrets, drama, hot steamy passion, revenge, lies, action, excitement, humor, control, cute and so much more. What really made this book for me is the narrations which was great and the plot that kept moving leaving you guessing and twisting around to some surprises.

Ms. Stephens narration was outstanding from her wonderful character voices to her powerful emotions. I just adore the little girl she was just so darling with the narrator pulling off a delightful character. Her tones are right on the money from pain, fear, excitement, sorrow and lost as well as delight and passion. There was no background noise or any volume change. If breaks were taken I could not tell. She has strong male voices as well as a mixture of women tones from strong right down to doubt, weak and standing her ground. Vy was a mixture of so many emotions the narrator pulled this off well. This is the second audio I have listened to of this narrator so much better than the last. She puts herself into this with fire, passion along with a wonderful mixture of the pull and tug each character must go through. Her males are tough, hateful at times, jealous and sometimes a pain in the behind. She really makes you feel each emotion the character goes through. At times making you chuckle and laugh. I can’t wait to listen to more of her work.

The author really pulled off a winner with some very powerful emotions, touchy issues and one cute darling little girl with so much wit. I loved how she turned the table on the adults, hiding what she needed to but coming forth if need be. She is one smart cookie that is grown beyond her age. I loved how she pulled off these characters really making them feel real. Just when you think oh my this is bad she pulls them through spinning a tale that really holds you captivated. Vy is strong, weak, lively, sad, broken, but when she needs to be she stands her ground. The author pulled off one amazing character with Vy.

Caleb comes off as a tough military man but inside he is so giving and gives so much more than most men would. He knows he is a live because of Vy and repays her for her kindness. When he should have walked away he stayed making sure they were safe. There are times you wonder if any of them will be safe. When will the good guys come in and take out the bad ones. He really needs no help he is a one man army all to his self.

I loved how the plot plays out, the buildup of the romance and how the author shows indifference throughout the story. There were times I held my breath, others when I just hung my head as well as time I laughed so hard. I had trouble putting down this audio I just needed to see the next scene and then the next. I was so invested I started yelling at the characters. A few times my hands went into fits and other times my eye grew very cold and hard. The only thing that would have made this better was to have seen how her family took the news about how her life had turned out. Beside that I could find no fault with this author at all. She really wrote a story that holds your interest, keeps you invested with exciting thrilling action, passion, as well as the unexpected that really throw you. I am so looking forward to more of her work.

Although, it was a short listen, it was well written and full of action. Characters are believable and well put together. I enjoyed this book.

This is my second read of this book. The book was just as enjoyable the 2nd time.

Entertaining and enjoyable short story with a military backdrop. Full of action, suspense and a little steamy romance and a HEA.

This was just a fun, interesting and entertaining listen for those times when you want a good story but want something a little shorter that you can finish in an afternoon.

Being a shorter story it moves at a pretty fast pace but still develops a believable relationship between Caleb and Violet.

When things don't go as planned on an mission to take out drug lords, Caleb is saved from certain death by an unlikely source. Violet isn't exactly who Caleb thinks she is. It’s easy to draw the wrong conclusion when you don't have all the facts. They need to work together to ensure they both survive the situation they find themselves in. The humor and childlike truth Amaya added to the story was great. It was able to break up the story and add some light -hearted moments. Unexpected but enjoyable ending.

Theresa Stephens did a good job with the narration. Pleasant voice easy to listen to for long periods of time. Good character voices. Of coarse her female voices are good and her voice for Amaya was perfect. Just a slight difference in her male voices was great. I really like that she didn't try to do a really deep male voice. So many narrators do this and it just makes the male characters sound stupid. Clearly spoken with a nice even pace. She was able to bring the characters and story to life.
There is no reason to read the table of contents. You only need to read the title of each chapter or say the chapter # at the beginning of a chapter. She also does this in another book that I have. It makes her seem like a novice narrator which she is not.

I was voluntarily provided this free review copy audiobook by the author, narrator or publisher.

“I was voluntarily provided this free review copy audiobook by the author, narrator, or publisher.”

Into The Crossfire was a fast-paced story with lots of action, romance and suspense. Violet (Charlotte) was not quite what she seemed and I liked that Caleb was able to listen to his heart and not his head. Her daughter Amaya said the funniest things! The narration was good but I didn't understand why it was necessary to list the chapter numbers at the beginning of the book. I really enjoyed Into The Crossfire and would recommend it to fans of military romances.

I was voluntarily provided this review copy audiobook at no charge by the author, publisher and/or narrator. This review is my honest opinion.

The combination of a Kathleen Hope book narrated by Theresa Stephens is a winner in my book.

I love they way the story line takes twists that I'm not expecting and keeps me guessing on what is going to happen next.

Caleb is interesting because he does opposites so well, tough but gentle, harsh but forgiving etc.

Vi/Charlotte is a great lead character because she's strong and has morals that drive her in the middle of a situation that would cause many to care only about their own best interests.

Together they combine into a combination that causes some sparks to fly.

Theresa did a great job with the narration as always, I always love her character voices, and especially the fact that her male voices come across as strong and confidant. I would try new authors just because she's the narrator.

Note: This book was provided free by the author/narrator/publisher in exchange for an unbiased review.

Both the author and narrator were new to me on this action packed book. I loved the unexpected twists, the things that came out of the little girls mouth, and the ending. The narrator did a fantastic job with the voices. She was able to convey the sense of urgency and emotions that one would not get reading the book. This is a standalone book and does not end in a cliffhanger. I was voluntarily provided with this review copy audiobook at no charge by the author, narrator, and/or publisher.

I got this ARC via audiobook boom. This is my voluntary review. This story centers around Caleb and his love life. He is all alpha male but is brought low when he tries to save a little girl. He is hidden by the h and they begin a rough friendship. The story and narrator are very good. It is a good story and is worth the credit.

I received this audiobook free for an honest review. I don't understand why the narrator read the Table of Contents, i.e., Chapter 1, Chapter 2, Chapter 3. I don't see the need for that, plus there weren't any titles. Seriously? What a waste of time. I really don't like the narrator. She put inflection in her voice at the wrong time. Although she does the male voices and the child pretty well. The story was okay. Very superficial. The story line was pretty good. However, it is obvious it is fiction. No SEAL team would leave their guy and not at least go back immediately and find him. Anyway, I guess that was necessary for the story. Not one of my favorites.