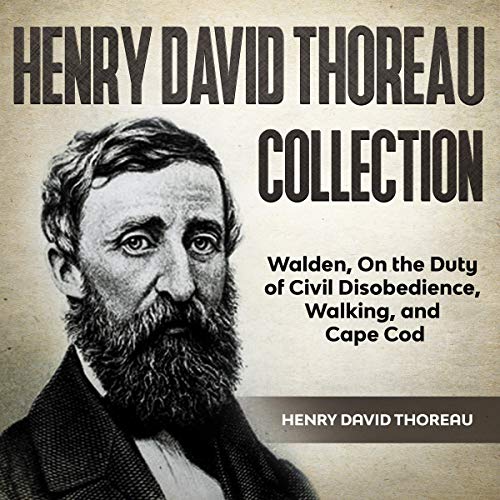 Henry David Thoreau was a 19th-century American writer and lifelong advocate for the abolition of slavery. His written works are many and varied but he is perhaps best known for works such as Walden, a book which promotes the idea of simple living in natural surroundings and for Civil Disobedience, which argues that the general population should not simply sit idle while those elected to government ride roughshod over their wishes.

Of his other published work, Walking stands out as one which deals with the importance of nature to mankind, something which we are becoming increasingly aware of, and the reason that we cannot survive without it, either physically, mentally, or spiritually.

Now, you can own all four of these perceptive and illuminating works in Henry David Thoreau Collection: Walden, On the Duty of Civil Disobedience, Walking, and Cape Cod.

Each is a work that is well ahead of its day in terms of thought and each reflects much of what we still face in the world today.

Allow the ideas of Henry David Thoreau to show the path that we should be taking and to shine a light in the darkest corners with this great audiobook collection!

This was part of a core "library" that I've given each of my children as they go off to college. They may not listen it this week or this year, but someday it might provide valuable perspective, as it has me.

As someone who does a lot of back country hiking, this is like a walk, but inside your own head. I have. A shirt that says, I hike to burn off the crazy, perhaps Henry and I are somehow related. My advice, kick back and enjoy!

Very nice collection of Thoreau's work. Perfect for anyone wanting to get better acquainted with Thoreau.

It is in tune with the training

It is in tune with the training I am going through. It is also helping to mitigate the loss I have recently experienced.

One of the Best books

One of the Best books I could find of Henry David Thoreau's works. The Introduction is a must read! It not only gives a detailed account of Thoreau's life, but a rather remarkable explanation and examination of his writings.

What can I say. I'm a follower of Henry David

What can I say. I'm a follower of Henry David Thoreau. This is my bible. I like the fact that it's designed light and you can carry it anywhere

In fairness though, I think this guy must have had plenty of cash to be sitting around all day thinking about stuff and Narrated when others no doubt had to struggle to survive. Still though, some nice content here.

I really felt as if it was being spoken by Thoreau himself. The cadence of the reading is oddly soothing, as Thoreau walks us through his daily life at Walden Pond. Listening to his essay on Civil Disobedience was an easy way to approach this classic, and I found it inspirational and ironically relevant to our current political climate.

Henry Thoreau was a complex man of great depth\

I enjoyed this biography of Thoreau

I enjoyed this biography of Thoreau. It makes him much more real as a person, with all the details of his early (and too short) life.