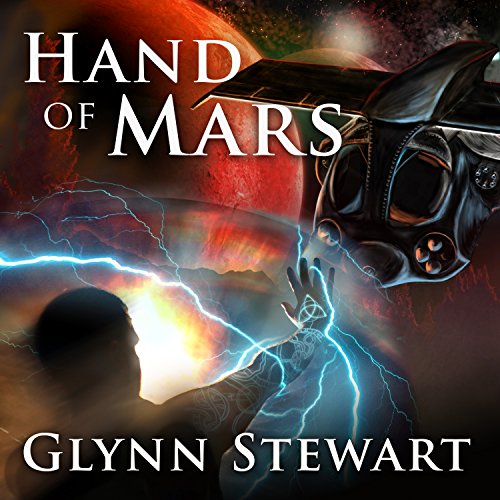 Three years ago, as ship's mage of the starship Blue Jay, Damien Montgomery was pursued to the edge of human space by both the agents and enemies of the mage-king of Mars before being brought in from the cold. Now, trained in new skills by the mage-king himself, Damien has been sent to the planet Ardennes alongside Alaura Stealey, hand of the king. A rebel movement there has destroyed cities fighting a governor seemingly lost to corruption. But not all on Ardennes is as it seems. As allies become enemies and an entire world comes apart in chaos around him, Damien will find both his skills and integrity tested to the utter limit.

I think better character development and a deeper world history would go a long way to improving this series. I only read the second book because the character was heading to Mars for "training" and I thought we'd learn more about the history of the Mage King and the rune magic and how Humans got to where they are in this world. Instead, the second book starts after the training and plunges the reader right back into another fast-paced action sequence with one chase, and near miss after another. It's like the books are all third acts with no first or second acts. . I found it repetitive after a while and just wanted it to end. There's no story arc. The villains repeatedly underestimate heroes and lose again, and again.

SPOILERS
I loved the first book. I was so excited to start this and see Damien's training under the mage king, only to find out it just skips his three years of training to end up in such a stupid situation. They knew that for an explosion that big had to come from the navy so why didn't they suspect them at all until it was too late? You're telling me that a bad to the bone very experienced hand of the mage king that knew the guy she was meeting with was a dirty rat willing to do anything but yet didn't think he would try to poison her which is literally the most common way to assassinate someone? a powerful mage trained by the mage king himself and a huge highly trained marine gets beaten by a pencil pusher who was handcuffed?? This is too ridiculous and I can no longer read such nonsensical writing. Thanks for reading my rant.

A little too simple

The basic plot is fair. The writer then seems to belittle the readers intelligence. The main character and his mentor are working for the King of Mars. The mentor is a Hand, the roaming judge, jury and executioner of the king. The main character starts story as an envoy. Envoys and especially the Hands are viewed by the general population with fear, mistrust and often hate. Envoys aren't treated much better. They go into volatile situations. The Hand is older and has survived many attempts on her life. She has had internal organs replaced from said attacks. At the beginning of the story, the main character and the Hand go to the planet in question with a warrant for the arrest of the villain. They know who he is. They are aware that he has been alternating facts in his favor. He is not just a local bad guy. He is governor of the planet. He is in position of much power. So why do they go into the situation with their eyes closed? Why isn't their star ship captain on alert? Why does the hand go towards the lions den and have a near fatal assassination attempt? Why does the hand then go into the lions den and get killed? Why are their supposedly protective troops unalert to the point they all get killed? Why is their starship captain and crew unalert to the same degree? If you can tolerate these poor facts in the beginning of the book, then you can tolerate the book. The reader does a good job. His tone in the narration portions are a little flat. But to me this makes the character impersonations easier to follow. His voice is clear and easy to understand. I enjoyed book 1 and was glad to see many books in this series available. But the quality of the plot has me not interested in the remaining books.

In the realm of Si-Fi it is rare that someone comes up with a faster-than-light drive that isn't based on some mechanical device. Not only does our hero able to travel pass the limits of our solar system, it's through his sheer willpower and ability to do so. Yet the character remains humble and keep second guessing himself. I thoroughly enjoyed our hero stepping up to the challenge.

This was a great follow up to the previous title, my one and only complaint would be the lack of emotion by the reader, although with some characters like the Mage King, it works well.

loved it ,it was fun to listen to would love for it to have sound track to it though.

In the sequel Montgomery faces even greater challenges, but faces them with much more power and training in magic. Looking forward to the next title in the series.

The author uses a good blend of fantasy and SCIFI. This is definitely not hard core science fiction, but it is a fun action packed story. Wish it was a bit longer but it is still fun and I will continue to listen to the story.

One hand falls, another rises.

This book had a lot less "did that really just happen?" going on than the first. These books so far are well written and very well executed verbally. If you enjoy science fiction, this series is great. It is a mix of magic and science set in the future. Has a great nobility base and fight against tyranny wherever it is found. the main character seems to find himself often in situations that no other mage nor hand of the king has ever had to deal with. He is the character you root for to win despite all odds.

Would you listen to Hand of Mars again? Why?

not sure, I think I'd rather read it next time

just that is was a continuation of the Starship Mage story

Who might you have cast as narrator instead of Jeffrey Kafer?

Please re-record this book with someone with some life, listening to Jeffrey Karcher was a chore, he used little inflection or emotion, obviously didn't care about the characters or the story in general, and I found it difficult to focus on the narration and was easily distracted.

And the hand goes on, continuing the saga , very well. it might get better. we shall see.

a typical story with an evil governor and the hero sent to get rid of him and free a planet and its people from oppression.
I like those types of stories as long as they are not complicated like this one is.