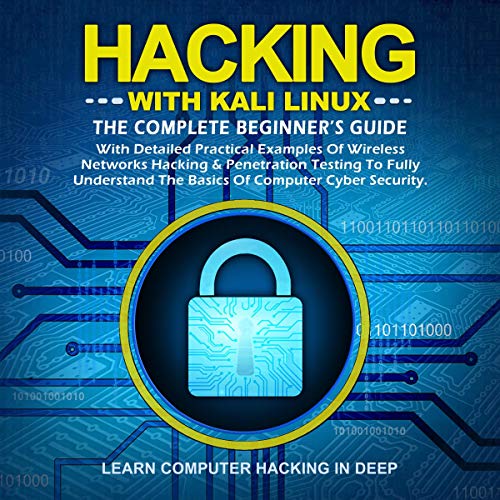 If you are very much worried about the security structure of your network or server and want to prevent all forms of attacks along with vulnerabilities on your system, then keep reading...

You might come across several problems at the time of installing Kali Linux on your system (and it is not funny). Also, if you are unable to install the same properly, you will fail in getting access this awesome software, and you will be irritated. But just like existing problems, there are also a wide range of troubleshooters which you can learn through this audiobook, helping getting rid of all forms of problems that come in the way of installation.

But why is Kali Linux so important to have?

You need to know that Kali Linux is much more than just hacking. It comes with some advanced forms of features which can help making your tasks of programming, along with hacking, a lot easier. But this software not only provides help at the time of hacking, but it also comes along with various tools which helps the users in testing out their networks for finding out the vulnerabilities in their network or system.

Furthermore, Kali Linux is integrated with several functions, which when carried out together, can actually do wonders. It can be regarded among the most effective software in today’s world. Most of the big companies today seek the help of Kali Linux for the purpose of tracing and checking the various forms of vulnerabilities which are present within a system and thus ensures 100 percent security for an organization.

Unless and until you are unaware of the basics, you will not be able to use this software. In fact, for carrying out an effective form of ethical hacking, you will need to learn about the various attacks, along with the forms of networks. You can easily find this information in this book.

Here are some of all the main elements which you can find in this audiobook:

But why can this book help me?

Because, this book will give you a detailed structure about the installation of Kali Linux software on your system and how you can configure the same. The chapters that you are going to find in this book are arranged with information, exercises, and explanations in a very orderly manner which can easily answer all your questions and can clear all your doubts regarding hacking and Kali Linux.

This book will be the perfect choice for you. It is something which you really need to have if you want to improve the security of your system or if you want to learn programming by using Kali Linux.