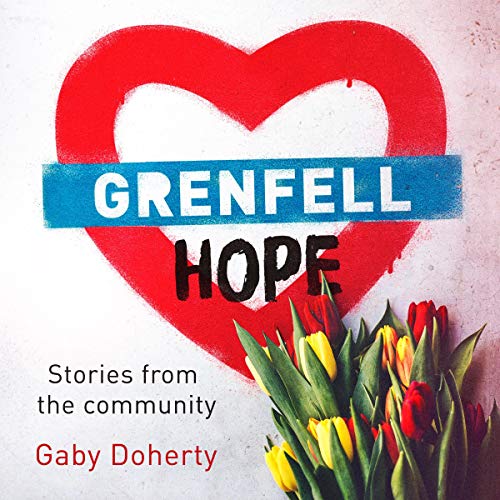 The Grenfell Tower fire broke out on 14th June 2017 in North Kensington. Over 150 homes were destroyed, and there were more than 70 casualties. With such extensive destruction, it’s hard to remember what it looked like before.

One year on, this audiobook honours the Grenfell community and how its residents banded together through adversity. Gaby Doherty witnessed the fire firsthand; her husband, Revd. Dr. Sean Doherty, a Church of England minister, was the first clergy person on the scene. Good things can arise from harrowing adversities. Gaby and her husband live in a flat nearby The Tower, and she lost friends in the fire. Gaby’s account will make you understand what it was like living in North Kensington and how even the smallest gesture can change lives.

In the aftermath of the fire, the community came together and raised aid efforts. God was seen in their actions, inspiring hope in what felt like a once futile situation. This book stems from personal experience of the impact of the fire. It features the testimony of locals, residents of the tower and those who came to help as well as on and by the community that experienced it, and the amazing stories of hope that followed in its wake. Grenfell Hope will help listeners understand what it was like living in North Kensington before and after the fire. It will help engage the listener with poverty issues, to examine attitudes to the poor and to consider how even small gestures in everyday life can change local communities.

In the desperate situation of the fire, God was at work in people’s hearts, bringing hope in tiny gestures that mounted up to something enormous. Hope that couldn’t be ignored or even contained. Hope sprang out all over the country.

About the author: Gaby was born a farmer’s granddaughter who, from the age of 5 to 18, lived on a farm in rural Somerset, with the nearest shops three miles away. Her experience of life was limited to the West Country, and she had no desire to stray too far from home. But when she committed her life to Jesus, this all changed. She decided she would go anywhere and do anything he wanted her to do. After university her faith led her to volunteer in Nottingham in an Urban Priority Area. She wanted to live alongside the poor, a condition she insisted upon when Sean asked her to marry him! For three years Gaby and Sean worked in a multicultural church in Cricklewood, where she made friends in the Muslim community, before the couple moved to West London, where Gaby joined the Grenfell Action Group.

"Gaby Doherty writes movingly from first-hand experience of the Grenfell Tower fire and its aftermath. Without minimising the horror of what happens she tells stories of hope in the midst of tragedy." (Revd. Nicky Gumbel)

"If you want to hear the stories from Grenfell Tower, listen to this book and listen to it with your church. Psalm 95 talks about hearing the Lord’s voice and not hardening your heart. Gaby helps us to hear echoes of that voice from that night and the days that followed. She asks about our response. From that terrible night have emerged stories of faith, hope and love." (Rt. Revd. Keith Sinclair, Bishop of Birkenhead)

"Grenfell Hope contains not only Gaby's heartfelt account but gives voice to those often overlooked or misrepresented in the media." (Amy Boucher Pye, author)