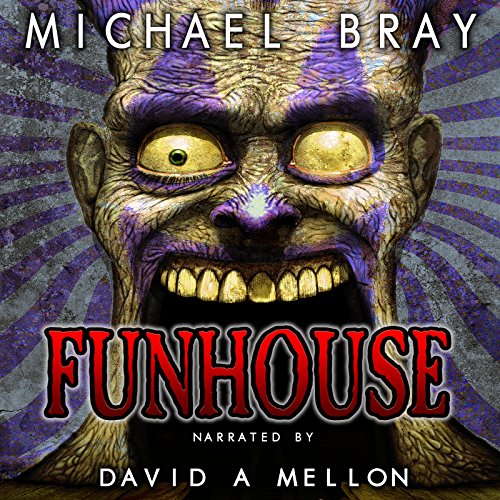 Roll up to the funhouse, a brand new collection of tales from the author of Whisper, Dark Corners and Meat, Michael Bray.

A man who makes an unscheduled stop gets more than he bargained for in "Candyland". A group of teens discover a terrible secret on Samsonite farm in "Scarecrows". A schoolyard bully and his former victim reunite with horrifying results in "Long Tall Coffin." A high school party becomes an arachnid nightmare for one unfortunate guest in "The Boy Who Saw Spiders."

These are just some of the horrors hidden within the darkest recesses of the funhouse. Look closer if you dare, and indulge in these 16 tales of madness, murder, terror and insanity.

The narrator sounds so monotone you are incapable of getting into the story. Wasn't able to finish.

This Narrator ruins the Story

The narrator that read this book was terrible. He had the same voice for all characters,and it was hard to distinguish between them at times.
The stories remind me more of R.L. Stine,if it weren't for the swearing. They were very predictable,and a little juvenile. I would not waist a credit or money on this one.

This is the 2nd title I have listened to buy this author and I really enjoy him. I especially liked "Scarecrows"

Would you listen to Funhouse again? Why?

I don't really listen to audiobooks a second time, so no. But, that has nothing to do with the stories or performance.

This was my second Michael Bray short story collection. I gave the first one I listened to 4 stars and really considered it 4.5 stars, only lacking that last half star due to a few minor inconsistencies in a few of the stories. But I still thought it was very good. I went 5 full stars with Funhouse. There's really nothing lacking in these stories. Mr. Bray tells a variety of angles from the straight forward, in-your-face horror to the angular type story that brings you in one way and then turns you another way right at the end. I'm highly impressed with Mr. Bray's stories and his control of the narrative. I highly recommend both books.

I don't know about scene, but I enjoyed his vampire story quite a bit. In Dark Corners he gave a unique spin on zombie stories, letting us see the perspective of a man turning into a zombie. I don't like zombies or zombie stories, but I liked that story quite a lot. In Funhouse, he gives us a future in which vampirism can be cured, and is in a man who is then immediately put on trial for all of the atrocities he committed while "infected". Hearing the former vampire's defense of his past in the court trial was interesting and somewhat interesting in a philosophical way. Again, I'm not a big fan of vampires or vampire stories, but Mr. Bray brought me a story that made me interested. Kudos, sir!

Read it, you won't regret it.

Would you listen to Funhouse again? Why?

Yeah, I really enjoyed most of the stories. It took me a thirty minutes or so to get use to David Mellon's narration. I don't mean to be rude, but seriously, don't quit your day-job. Bray's tales were as engrossing, as expected. I can't wait for the next series of short stories.

It was a book of sixteen short stories, so I don't really have a favorite character.

Would you be willing to try another one of David Mellon’s performances?

Certainly not. He seems like he might be a decent enough guy, but his narrations were sub-par in comparison to everyone else in the business. The quality of the recording was just as bad, if not worse. The reverb made it sound as if he was reading in the bathroom while sitting on the can. He read okay but had no emotion, all the characters sounded the same, and emphasis was left out. He reminded me of the kid in the back of the classroom that the teacher made read out loud.

I'm not the creative type, so I'm not going to attempt to go there.

Michael Bray writes really good stories. This is the second of his books that I have read (or had read to me). I enjoy them very much and can't wait for his next release. I'm thinking about spending my next credit on his novel "Whisper". He also mentions in the author's note that he did away with 17 of the original 18 titles. I would ask him to go ahead and put them out, as I am interested in reading them. I understand that he has come a long way since writing those stories, but I honestly thought Cabin Fever was one of, if not the best story in the book. This is the one story from the original book that made the final cut. That has me curious as to how good the other 17 are. We are our own worst critics. Go ahead and put it out, and see how it does.

CRAP NARRAT0R MADE ME GIVE UP!

Would you try another book written by Michael Bray or narrated by David Mellon?

Would you be willing to try another book from Michael Bray? Why or why not?

Would you be willing to try another one of David Mellon’s performances?

The stories would be in the Stephen King pool if not for crap narrator.

Would you recommend Funhouse to your friends? Why or why not?

no, buy the book not audio book.

Who might you have cast as narrator instead of David Mellon?

Do you think Funhouse needs a follow-up book? Why or why not?

Just re read with a talented narrator

All of the stories with the exception of one kept my attention to the end.
A great collection of shorts from an author who gets better and better over time.

To think this kind of drivel actually gets published

Actually the ideas are sound enough though not original at all. The writing is poor and the reading not good either. This might be anything but really it’s just plain awful and to think this kind of drivel actually gets published and people like me, unsuspecting as we are looking for a good scary story read it or have it read to us. Well so who’s the fool? Not sure about that but I would not recommend this to anyone.

absolutely monotonous (literally) narration, could only bear it for less than ten minutes, so no idea re. quality of the stories!...please Audible remove this monstrosity.... I want my money back!!!!

My second Michael Bray book and I enjoyed every one of the stories. Before purchasing I read a review which described these stories as predictable and juvenile. Hmmm, probably describes me perfectly but not this book! Ok, sure, it isn't in the same league as some of the big name authors who also write short stories, but I think it is certainly worth listening to.