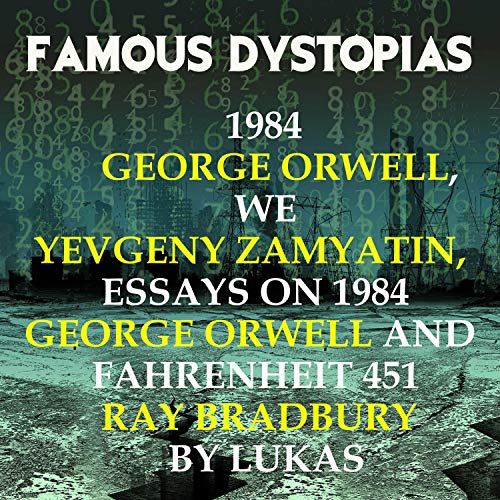 1984, by George Orwell, was touted as a savage satire of communist regimes for the first half-century after its publication. However, in today's decommunized world, the details of 1984 increasingly reflect our present realities. Modern man now finds himself surrounded by the then-fantastical situations depicted by Orwell, i.e., dependence on global corporations, the prevalence and influence of social networks, video surveillance, and media propaganda. In London alone, more than 600,000 CCTV cameras film the movements of passersby over 300 times per day.

A classic in dystopian literature, 1984 eerily foreshadows our current world. Yevgeny Zamyatin wrote We in 1920 and thus, became the forerunner of dystopian literature, a genre that would grow to include authors such as George Orwell, Aldous Huxley, Ray Bradbury, and Ayn Rand. His visionary novel is set in the 25th-century city of OneState: a city enclosed with glass and constructed with rigid geometric conformity. The all-powerful Benefactor holds the city under a totalitarian rule that strips the passion and creativity from the populace until a mathematician, called D-503, one day discovers that he has an individual soul.

Bonus Feature: Included with the text is a short biography of George Orwell and Ray Bradbury and listeners' notes for 1984 and Fahrenheit 451 that summarize each story's plots, main ideas, and characters. A further critical essay explores the impact of each book on later authors and the development of dystopian literature. These essays have been compiled especially for students and lovers of literature who wish to gain a fuller understanding of the stories they love or the texts they are compelled to study.