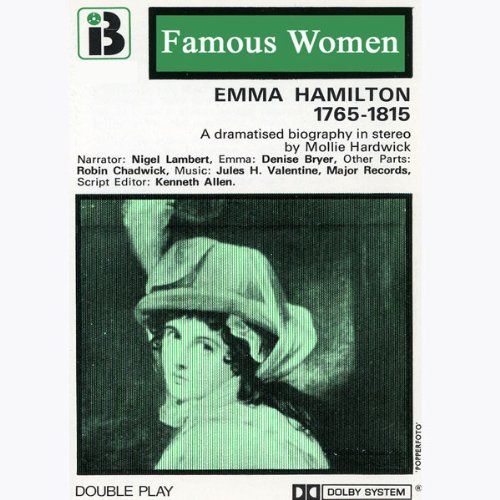 Emma Hamilton came to be recognized as the most beautiful woman of her age and has become immortal in history for her romantic involvement with Nelson, England's greatest hero. As well as beauty, she had great gifts: she was a singer of professional ability, a natural linguist and actress, and a shrewd behind-the-scenes politician. She captivated almost everyone with her warm-hearted, extroverted charm. Yet she aroused bitter jealousy and has been persistently branded with the stigma of loose morals - largely due to misunderstandings about some circumstances of her early life.
©1976 Mollie Hardwick (P)1976 Ivan and Inge Berg

The most widely followed 18th-century English celebrity, Emma Hamilton asserted unprecedented influence on art, dance, music and politics at a time when women weren’t freely permitted to own property. Simultaneously, Hamilton enjoyed a controversial ménage a trois with Sir William Hamilton and Lord Nelson, and accordingly challenged prevalent opinions regarding feminine sexuality and domesticity. Radiant actress Denise Briar is confident but reflective as she presents Hamilton’s primary-source memoirs. In his glowing canter, BBC stalwart Nigel Lambert hosts an ensemble cast, following Hamilton from her burlesque beginnings as a London working girl through her trendsetting career in portraiture modeling. In addition to the aristocratic suitors she attracted, Hamilton was a trusted advisor to the queen of Naples, and her political impact is detailed here.

I think this is a story the paparazzi would of picked up on, telling just the juicy bits and leaving out a lot of the detail, for instance Emma was a dame in Her own right, she was an 'honorary knight hospitaller' for her assistance when the British took Malta from the French, that she was more help to the British in Naples then her ambassador husband Sir William. That she payed for schooling for her in-laws children and cleared their debts. She did die in obscurity from amebic dysentry, her grave was attended by her friends in Calais, and is still looked after today. So I'm afraid only one star and that's for entertainment value.