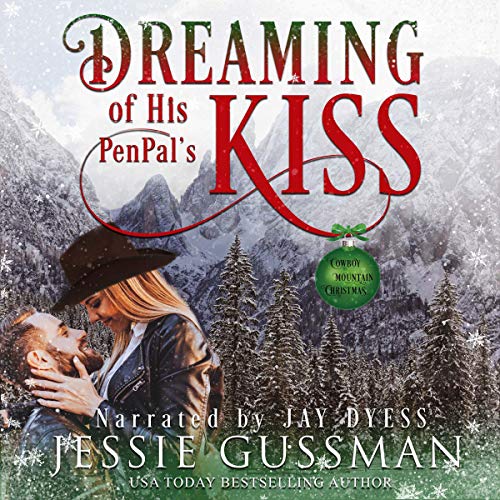 Journee Barclay isn't interested in the big, hulky football player the town of Mistletoe wants her to date. She's been writing to a sweet, shy computer geek, and she's hoping he'll eventually ask to meet her. But putting the town off is getting to be more difficult every day.

Football star Dante Tolzien came to the town of Mistletoe, Arkansas to rest and recover from his recent car accident on the advice of his doctor. While in the hospital, he enjoyed writing to a secret pen pal. While a part of him would love to meet his unknown friend, another part of him is more interested in the real, live nurse in front of him.

Unfortunately, she seems to be stuck on a man no one has ever met.

When Journee and Dante are entered in Mistletoe's own Not-Such-An-Ironman contest together, sparks fly. But can they let go of their pen pals in order to pursue a relationship with each other?

Dreaming of His Pen Pal's Kissに寄せられたリスナーの声

Wonderful and heartfelt story and awesome narrator. Such a great combination is not to be missed! ❤️

Do you need a good laugh? Listening to this audiobook will brighten your day. Gussman has written a book full of witty banter between the main characters, Journey and Dante. Dyess's narration brings the whole story to life with his wonderful voice. I'm looking forward to reading/listening to more books by this author and narrator.

This book was so funny! While I was reading, I'd laugh out loud such that my daughter and husband kept asking me what was going on in my book. Jessie Gussman doesn't disappoint. Journee and Dante are meant for each other - Race is at his matchmaking again. And the premise is so surprising and wonderful, fun and funny! Very entertaining!
Audiobook - I am always amazed at the fact that when I read the book, it's amazing, but then when I listen to Jay Dyess read the same book, it elevates it to out of the ball park amazing! I laughed harder and more listening to Journee and Dante's antics during the audio book like I hadn't even read that part, even thought I remembered it from my read through. The wrapped pig was so funny! I am always so delighted with the voices Jay give each character. Thank you for sharing your talents with us, Mr. Dyess!

one of my favorite couples

Matching making taking place for more than one couple. I loved Journee and her kind heart. Their letters grabbed my attention and kept me reading. I even missed them once these two met. What happens when you meet someone you begin to fall for but your pen pal is on your mind and in your heart? Some really touching conversations as well as hilarious moments between Journee and Dante. A really romantic ending. One of my favorite couples in this series. I loved this book so much that I have now read it and listened to it. Jay the narrator does such an amazing job!!! One of my favorite book narrators.

Hard lessons learned with more than a touch of humor-don’t wake your hubby while giggling.

Wow! I loved the book and Jay’s narration takes it over the top amazing. The conversations are spot on with being able to recognize the characters. I don’t know how he’s able to narrate and be in the story without starting to giggle at some points. The story itself is classic Jessie Gussman, pulling you in and taking hard situations like Dante wondering if the car accident and injury is going to end his career and realizing his friends and the many girls aren’t really there for him during recuperating. Journey is being his pen pal, and since they can’t identify each other, they dig deeper and have fun. The last half of the story in Mistletoe is just fun-it should come with a warning label-don’t listen or read while in bed with your hubby sleeping, you’ll wake him up with your giggling. Even among all the fun, good life lessons are being gently portrayed in Jessie’s unique style. She is one of my go to authors that I read everything she writes.

As always... another great one by Jessie Gussman and narrated by Jay Dyess. Jessie wrote such a fun story here. I loved how the pen pals meet and get to know each other a little without knowing who the other one actually was. I also liked how Dante let Journee know who he really was. The characters were well developed and while this was a part of a great series, it can also be read as a stand alone.

What can you say about Jay Dyess except that he is such a great narrator. I wish he recorded for more of the authors I enjoy. He has a way of bringing characters to life and making you feel like you are right there in the story with them.

The author gifted me with a copy of this audiobook and I am voluntarily leaving this review.

Another great story in an enjoyable series!

Journey the youngest in the family has had her heart terribly broken so men were very low on her list of priorities. She enjoys her life in Mistletoe being an ER nurse on the night shift so she has lots of time to herself to read and write letters to people in the hospital. Her dad Race the pastor had started this program to encourage people who were alone in the hospital. The rules were very plain though no names or personal information to protect both parties. Dante is a famous football player who has had a very difficult upbringing and football has become his life and he works very hard to be his best at it. This story has some very emotional parts with a lot of wisdom for people that are thinking of being in a relationship. As always with Ms. Gussman there are lots of laughs and fun. Mr. Dyess does a great job of making this story something you want to hear every word.
I received a free code for this book from the publisher to listen to on Audible.com. This review is my own honest opinion.

Sweet and romantic
Writing letters and participating in Christmas (or not so Christmas) contests - Journee and Dante’s story is so much fun to read. My favorite element of the book - the humor and the banter between the characters! It is a great series! Highly recommend!
Awesome narration!

The letters in this story are delightful and an integral part of Dante’s character arc. They also create a shared history so that when the protagonists meet, it’s not as shocking when they hit it off right away. It feels less like insta-love and more like a continuation of what was started in the letters.

The letters are so wonderful and then, when the two of them meet, the banter is hilarious—all while the romantic sparks are flying—what a fun book to read!

There are deeper, spiritual and emotional issues that are addressed in this book. As with all of Ms. Gussman’s books, the quirkiness mixed with depth of character, mixed with difficult back-stories all combine to make her books light-hearted while at the same time, compelling!

I love Jessie Gussman’s books. Her characters think about what God wants, how it looks in everyday life and how to trust him enough to allow His will to guide their lives.

Jay Dyess takes an already wonderful book and makes it even better! His talent with voices is undeniable. He has an arsenal of voices and uses them. But that's just the tip of the iceberg; he reads with emotion and feeling. He truly brings books to life. He creates an atmosphere that pulls you in and helps you to feel that these characters are real.

Jessie Gussman has added a wonderfully sweet book to her series. Jessie is absolutely clever with her storeline. I would truly love to see the not so Iron Man competition in person. Thank you Jessie for writing such wonderful clean books and making you feel as though you're part of the story.

Jay Dyess is amazing. He has perfected each and every voice. He is spot on with the character's emotions. His pace is absolutely perfect.

Jessie and Jay are masters of their professions. I am never disappointed and highly recommend both.

I loved this audiobook and I have absolutely no hesitation in recommending it!
I love the way Jessie Gussman starts this story and it showcases just how good a performance Jay Dyess gives.
He effortlessly brings these characters and their sweet romance to life.
I don't want to give spoilers for this, I want to urge listeners to immerse themselves in this delightful story.

This was such a great idea for a book. Just the banter in the beginning of their penpal exchange was funny, but when they interacted unbeknownst to them in real life I thought it was awesome. Well this is a Jessie Gussman book so of course it’s going to be awesome and of course Jay is going to do a fantastic job, but Jay never ceases to amaze me with this talent and then this book in an every new book it seems like they just get better and better. I think Jessie and Jay have the best books on audible and if you’re looking for a sweet and clean romance story look no farther. I loved it!