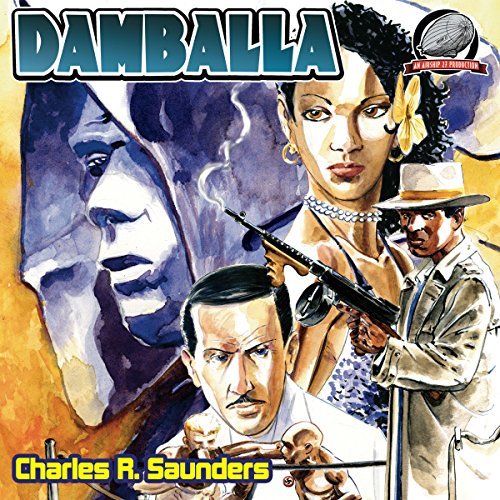 From the heart of Africa to the streets of Harlem, a new hero is born sworn to support and protect Americans of all races and creeds; he is Damballa and he strikes from the shadows. When the reigning black heavyweight boxing champion of the world agrees to defend his crown against a German fighter representing Hitler's Nazi regime, the ring becomes the stage for a greater political contest. The Nazis' agenda is to humble the American champion and prove the superiority of their pure-blood Aryan heritage. To achieve this end, they employ an unscrupulous scientist capable of transforming their warrior into a superhuman killing machine. Can the mysterious Damballa unravel their insidious plot before it is too late to save a brave and noble man? Airship 27 Productions and Cornerstone Book Publishers are proud to introduce pulpdom's first ever 1930s African-American pulp hero as created by the acclaimed author, Charles Saunders.

Would you listen to Damballa again? Why?

The hero, Damballa, he is a great character.

The fight scene, as Mr. Worthen becomes the radio announcer detailing every blow of the boxing match.

I enjoyed this reading so much and hope to find more of Mr. Worthen's reading here at Audible.

Would you listen to Damballa again? Why?

Damballa from acclaimed writer, Charles Saunders, known for his groundbreaking work on the IMARO book series, that I highly recommend, gives the readers a hero who would give Doc Savage, The Shadow, The Avenger, The Spider, and The Green Lama a run for their money. And as a fan of the Black Panther of Marvel Comics, Damballa was right up my alley. In many ways, Damballa forsees the rise of superhuman vigilantes of color some thirty years before their appearance. And in a time when there were no known pulp heroes of color in print, Mr. Saunders is able to redress a serious and tragic incident in literary history. And as far as the story itself, Mr. Saunders could not have picked a more perfect period in race relations than using a very important boxing match (Joe Louis vs. Max Schmeling) as the basis for an adventure that has international intrigue written all over it. And the narrator, Calvin Worthen, was skillfully able to embody ever single character he voiced and set the tone of the novel so well that you get caught up in that time period leading up to the Second World War. You did an outstanding job, Mr. Worthen.

Damballa. He is proto-Black Panther in movement, and a master in tactical thinking. He's a master Chessmaster who think many moves ahead of his opponents. I wish he had existed back in the days of pulp literature. He would have been a force to be reckoned with.

Everything single moment of the book was served well by Mr. Worthen's voice. He got into the time period as he described Harlem of the late 1930s, and as he voiced every character. His narration made me want a crossover between Damballa and Derrick Ferguson's Fortune McCall. That's how great of a job he did. Mr. Saunders did well to have Mr. Worthen narrate DAMBALLA.

Seriously, there needs to be a crossover between Damballa and Fortune McCall, and his team. Narrated by Calvin Worthen, of course. Airship 27 and Pro Se Productions get on it!

Black vs The Reich via boxing!

Another great African Based Story from Charles R. Saunders. Definitely need to be a movie! I loved every action packed moment of it. Spritiually and Adventure... a must read!

i am looking forward to the movie. I hope someone bought the movie rights.