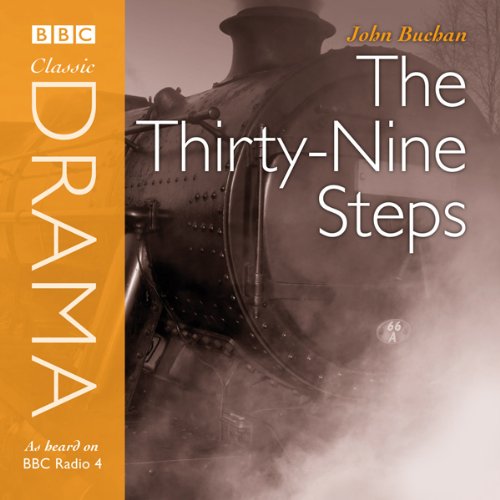 In this classic tale of wartime espionage, Richard Hannay's living nightmare begins at home with the discovery of a dead man in his London flat. He becomes an innocent on the run, pursued by the police for a murder he didn't commit.

In Scotland, Hannay realises that the notebook he recovered from the dead man is worth far more than he first thought, not least of all to a gang of German spies who will apparently stop at nothing to retrieve it.

The Foreign Office in London is his last refuge of safety, and when Sir Walter Bullivant becomes convinced of Hannay's innocence, the two join forces. If they are to foil German plans to attack the British fleet, they must first unlock the notebook's secret of the 39 steps...

The cast is fabulous and the quality is what you'd expect from a BBC production.

It is a shame that it's abridged but you cannot have everything.

Plus, it's always great to hear Tom Baker!

I just live these old style war thrillers, some great 'non-pc' lines and such a devil may care attitude. Yes it's a thriller but it's incredibly relaxing to listen to.

cracking yarn set at the advent of WW1 .

Top notch performances by all the cast , I really got into the story , it is John Buchan's finest novel set with a lucid imagined picture drawn by this excellent production . I thoroughly recommend this version .

love this book, and the film

loved this book. it's a true classic of mine, loved the film as well. Great

Good narration and drama, much enjoyed. Finally listened to it after being on my list for years.

for me this work was disappointing, shortening a text is to be expected but this dramatisation removed much of Buchans rich and descriptive period language and replaced it with modern words and slang terms which left it flat.

Enjoyed this different take in the Thirty Nine Steps starring good old Dr Who Tom Baker as usual loud and striking. No matter what it is Baker acts, he steals the show. Excellent full cast and one to listen to many times.

Good Dramatisation of a classic piece of literature. The audio is just the right length and pace.