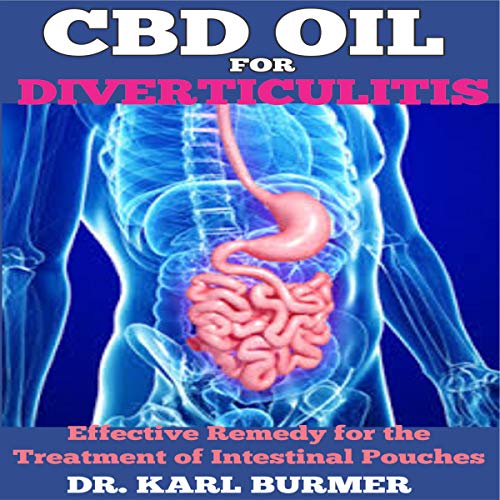 CBD Oil for Diverticulitis: Effective Remedy for the Treatment of Intestinal Pouches

Diverticulitis is a form of diverticular disease that occurs when abnormal pouches called diverticula that form on the walls of the lower intestine become inflamed and produces a variety of symptoms such as cramps, bloating, pain in the lower left side of one’s and constipation. Most often diverticulitis is a result of an inappropriate diet; therefore, “the sigmoid part of the colon has to exert so much pressure to propel the feces that the walls of the intestine herniate.” [1]

If these particular pouches contract an infection or cause an obstruction a person may require antibiotics or, in an acute case, surgery.

Diverticular disease affects the bowel that has many forms; however the most common is diverticulosis and diverticulitis.

These two conditions are connected in the fact that both are caused from the formation of abnormal pouches called diverticula, however the difference lies in the severity of symptoms patients experience. People who have these abnormal pouches without symptoms have diverticulosis, but once inflammation occurs and symptoms worsen the condition is considered to be diverticulitis.

Approximately one in four people that have diverticulosis develop symptoms that are a result of inflammation or diverticular bleeding and this most often occurs in the more developed Western countries such as the United States.

The bowel measures approximately 25 feet long and contains the small and large intestine, which receive food that is passed through the stomach through the pyloric valve. The small intestine is the first to receive the food, and the muscles contract and carry food along the path that leads into the large intestine. There are three sections to the small intestine, the duodenum, jejunum, and the ileum and the walls are covered with microvilli, “hair like projections of the mucosal lining that absorb nutrients into the bloodstream”.

Once food reaches the duodenum, the breakdown process begins as digestive enzymes passed from the stomach, small intestine and pancreas and bile from the liver begin turning proteins into amino acids, fatty acids and simple sugars. At this point the food is then transferred to the jejunum, where the majority of the nutrients are absorbed and finally, the remaining vitamins are absorbed in the ileum.

After completing its cycle in the small intestine the waste is then transferred to the large intestine and is processed through four stages the first being the cecum, second ascending and descending colon, the sigmoid colon, and then the rectum.

There are no nutrients absorbed when the food is processed through the colon; its only job is to remove excess water from the waste and return what is removed to the bloodstream. As the process continues and the water is removed, the material begins to form a substance that is more solid, which is called stool. The waste normally spends approximately one to two days in the colon before the body expels the waste.

As we grow older, most people begin to form abnormal pouches, diverticula that “bulge outward through weak points in the wall of the large intestine” and these individuals are diagnosed with the less severe condition called diverticulosis.

CBD Oil for Diverticulitis: Effective Remedy for the Treatment of Intestinal Pouchesに寄せられたリスナーの声