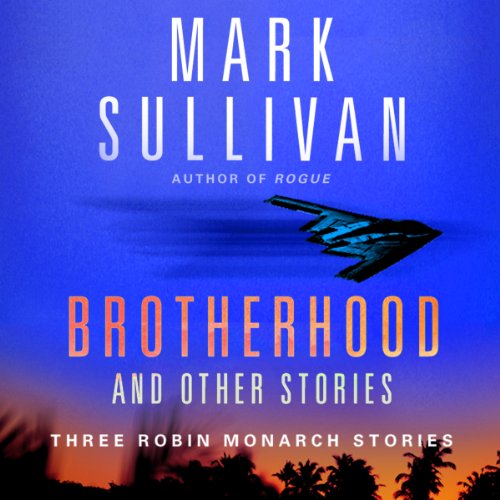 Robin Monarch - called "one of the most compelling heroes since Jason Bourne" (Lisa Gardner) - is introduced in these propulsive, nerve-wracking stories.

"Brotherhood": Robin Monarch is a man with a complicated, secret past and a very grim future. Currently locked up in the USDB - the military supermax prison known as Leavenworth - the CIA offers Monarch one shot at freedom and a pardon. All he has to do is steal something from a highly secure position at ground zero of a war zone, and escape undetected.

But this isn't Monarch's first time at this sort of dance. As an orphaned teen scraping for survival on the streets of Buenos Aires he was involved with the Fraternidad de Ladrones - the Brotherhood that schooled him in the art of deception and survival. But his initiation rite requires him to use all the skills he has learned, and all the nerve he possesses, to steal something of great value under impossible circumstances. In both cases, success will require everything he has - skill, wit, endurance, and intelligence - and means survival and freedom. And failure...failure is to lose all that he has.

"Art of Rendition": Monarch is now an agent for the CIA, and is called upon to use his unique skills to kidnap and interrogate a Russian nuclear scientist suspected of selling technology to the Iranians. But that's only part of the challenge - one that many trained agents could handle effectively. They've called upon Monarch because, after the interrogation, he must return the scientist without the Russians, the Iranians, or the scientist himself ever knowing he was taken.

"Escape Artist": Monarch's abilities - and his nerve - are both tested when he's sent deep into the jungles of the Congo, into the encampment of an army of boy-soldiers under the leadership of a man calling himself Lieutenant Zed. Undercover as a black-market diamond dealer, Monarch's job is to steal the largest, most perfect diamond ever seen, before Zed is able to sell it and use the proceeds to continue waging war. But as any thief could tell you, getting in is the easy part. Getting out, however, from the heart of an unfamiliar jungle with a hostile "army" at your back, requires more skill and luck that even Robin Monarch can count on.

Brotherhood and Others is an audio book of three Robin Monarch short stories. All 3 are quite good but Brotherhood is better than either of the others. Act of Rendition, a kidnapping story, is also quite clever. Escape Artist is the weakest of the three. For fans of Mark Sullivan's three novel Robin Monarch espionage series these are worthwhile short stories.

stayed n2 this. no break's with this1. straight threw and on a Saturday n the rain.

The story jumps around too often

Mark Sullivan likes flashbacks...a LOT! AI get it, a good flashback scene enriches a story. But too much of a good thing does not make it better. If I were reading it might be different. You can see the scene change, but that is not the case when listening. If the author stayed focused on the story and didn't vomit in so much backstory, I would be inclined to add a star or two. As it is, I am afraid to purchase any of his novel length audiobooks because half of these stories are in flashbacks. That is truly unfortunate, because Robin Monarch is an interesting character. Until I find out he's writing differently, I'll have to pass on Mark Sullivan’s offerings.

Robin Monarch is a great new character. Former petty thief and gang member from Buenos Aires turned special forces soldier and CIA operative, Monarch shows a unique ethos toward his job. The stories alternate between his formative time as a petty thief and his current assignment. This is sometimes hard to follow but an interesting way to dig into a character's motivation. Mark Sullivan packs a lot of interesting story and fast action into a small space. A new favorite for me. BEWARE - the "and other stories" is just one additional story which is Rendition. Rendition is also a separate audible selection, so don't buy both.